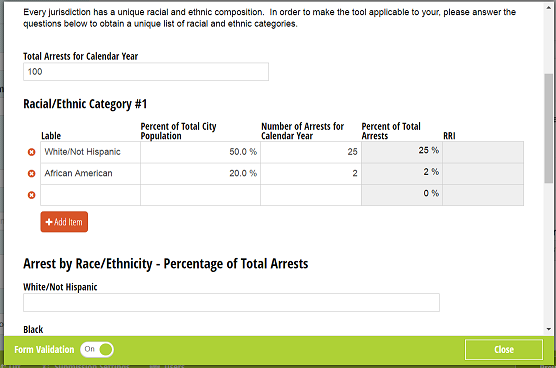 Since I am not an expert on RRI calculations, let me state a few assumptions about what you are asking:

Assuming these assumptions are correct, let's start with the algebra necessary to perform the calculation:

Now, performing a bit of substitution, we have:

Total Population cancels out, and we are left with:

Now, switching over to Cognito Forms calculations from algebra, we can calculate both the Percent of Total Arrests and the RRI solely using information entered into the table.

When the table is then filled out with information, the results are as follows:

Obviously, the RRI for White/Non-Hispanic will always be 1.00 since the numerator and denominator are the same. Please update your post the clarify the question if my assumptions are incorrect!

Finally, here is a shared template showing the form in question, with all the necessary calculations: https://www.cognitoforms.com/templates/shared/ThomasFamily/RelativeRateIndex

2
Having more than 2 options in Cognito Form
2
How do I apply coupon code calculation in Cognito Forms?
2
Can Cognito Forms calculate rental inventory availability by date and other variables across multiple form submissions?
0
How do I insert page breaks after each repeating section item in custom document merge templates with Cognito Forms?
3
Allowing field entry only once in Cognito Forms (discount codes)
1
Preview function no longer seems to work
0
Import Cognito Forms data from another page
1
Select case conditional logic