How do I prevent multiple choice grid options being hidden like in the image below? 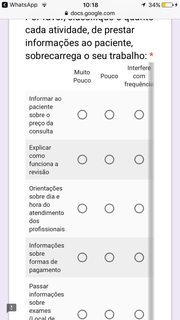 In this case the 4th option is hidden and the horizontal scrollbar isn't shown, what might drive users think that there's only 3 options.

I'm afraid that the Google Form web app doesn't offer an automatic way to prevent that some grid choices being hidden as is shown in the OP image. One alternative among others is to have two sections, one for large screens and another for small screens.

Not the answer you're looking for? Browse other questions tagged google-forms or ask your own question.

2
How to set input type = “tel” to the answer input field?

6
How to add a multiple choice question requiring a single selection?
1
Creating Google Form with many list options
0
How to dynamically retrieve and display data based on input from google forms
3
Is it possible to poll for a schedule?
1
How to upload a photo from mobile phone to Google Forms as an answer?
0
How to add multiple conditions onto a query
1
Google Forms/ Sheets