Gmail loses original "From" address when forwarding an email

This happens a lot, in our work email system, which uses Gmail and various internal email groups:

Even if you look at the actual email data, in the "Show Original" option, it's gone.

Does anyone know if there's a setting in Gmail to stop this happening?

EDIT: here's a screenshot. I've just noticed the "Via Helpdesk" bit, I wonder if that's part of the problem.

EDIT: Added another screengrab showing how the original appears.

This is how the original looks: 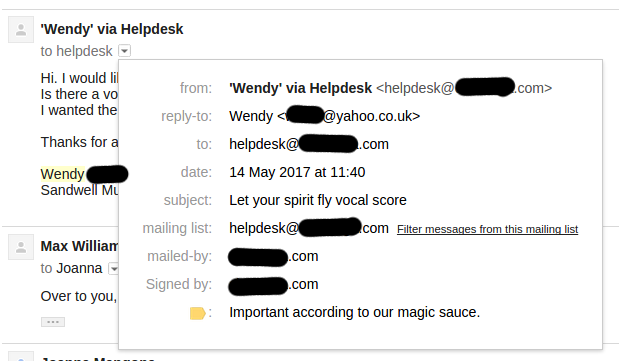 From the pictures and updated information, Gmail is forwarding the email inline. Vanilla Gmail appears to only support forwarding emails inline. When emails are forwarded "inline", only a small amount of information from the original email is preserved. As shown in the pictures, the headers From, Date, Subject, and To are extracted from the original message and rendered in text form in the inline-forwarded email.

The technique your helpdesk system uses for forwarding emails replaces the From with helpdesk's own email address. This is necessary because otherwise Gmail's SPF policies would cause it to reject the mail or immediately mark it as Spam/Junk. Since your helpdesk system puts the original sender's email in Reply-To, you can still reply to those messages to reply to the original sender. However, if you forward the email inline, Gmail's inline-mail-header-formatter will not copy the Reply-To header because it just doesn't. That is, Gmail is keeping the From; it is your own internal system that is losing the From before the message gets to Gmail. And Gmail does not preserve Reply-To.

Now, it is possible to forward emails as MIME attachments in Gmail. If you did this, the receiver of the forwarded email would be able to see the original Reply-To header of the attached email. However, this is an involved and impractical process because Gmail's web interface is not able to do the work for you. I would suggest using Gmail's feedback feature to request support for forwarding emails as MIME attachments (as this is a standard feature in desktop mail clients). Another option is to set up a desktop email client (but that solution is outside the scope of "WebApps”, hmm…) with Gmail since it will not have this limitation.

Not the answer you're looking for? Browse other questions tagged gmail email-forwarding or ask your own question.

4
Set up a forwarding email account with Gmail for Business
4
In Gmail, how can recipients be moved back and forth between the To and CC fields?
2
Forwarding into Gmail became unreliable
3
Gmail - auto forward email but change subject line
1
How to forward all email received in Gmail account when using a filter?
0
Reply to email from forwarded email account using original email address with Gmail as forwarding target