I have a Google Sheet that looks like this: 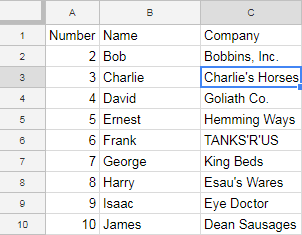 That Google Sheet has some Google Script that looks like Google This:

When I run that script with the sheet as seen above, the log has this text:

That's as expected. Now, I add a Filter View to the sheet so it looks like this: 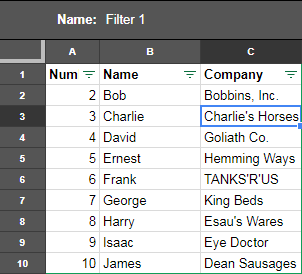 When I run the code again, I get the same output:

However, when I sort that filter view, things go haywire. 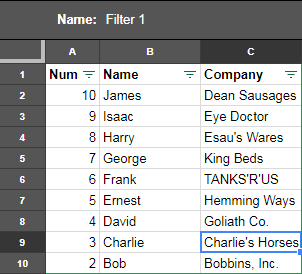 I've sorted by column A descending but I still have "Charlie's Horses" selected. When I run the script, though, the logger has an unexpected output:

It has the expected range address of C9 but the value is not what I'm seeing. As far as I can tell, that's because .getValue() is pulling the data from the original, unfiltered view of the sheet.

Is there any way in Google Sheets / GAS to reference cells in a sorted filter view rather than the data in the unfiltered view?

The script that raised this issue needs to collect the values for cells on the same row in column A and C as well as getting / updating the comment on the cell in column C. If I'm able to reference the correct range object, I could work it out from there.

On April 11, 2018 Google added new classes to handle filter but not for handling filtered views.

2
Searching a value between two columns on a reference sheet
2
Organize employee time log into a table with a row for each employee
2
Sort a range in a shared Google sheet without temporary filter view
4
How do I reference the values of merged cells in formulas?
0
SORT formula is pulling in null cells
3
Catch New Rows in Existing Filter Views
2
Find the closest value within a range of cells and output cell reference
2
FILTER has mismatched range size; referencing the second last cell in a column in range
2
How to reference a dynamic range in Google Sheets Script?
0
Auto Sort different ranges