I have a Google Voice number which I would like to list on Facebook so people can contact me with it. When I try to enter the number in my Facebook profile under either the "Mobile Phones" section or "Add other phones", 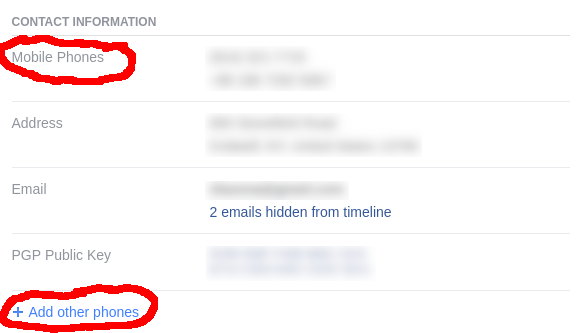 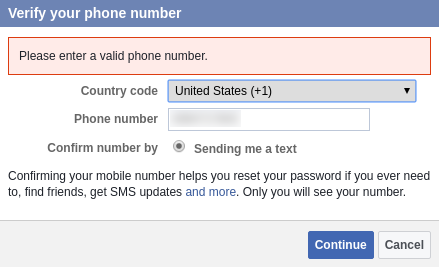 From what I've read around the web, I suspect this is because Facebook doesn't want people using VOIP numbers to create accounts, as a crude form of tying accounts to real people. For purposes of this question, I'm fine with Facebook having my real cell phone number on file, but I would like to be able to display my Google Voice number on my profile, and I can't seem to do that. Facebook flat-out refuses to even show the number.

I've searched the web and found a couple procedures that claim to allow you to add a GV number to Facebook, most promising being this page from the Facebook community forums, but that procedure fails at the third step: where it says "The number will save!", instead I get the error message shown in the second image above. Note that, again, I'm not trying to make my GV number my primary number as the page is describing, I'm just trying to make it show up on my profile for people to see.

Is there any way to make this work?

You have to remove your current phone number in FB before you can add the GV #. This will allow you to select Google as your carrier, as you cannot select it if you already have a primary number set.

3
Facebook not letting me add phone number, says it's invalid

4
How to port an existing number to Google Voice?
3
How to deal with Facebook real name policy?
6
Associate phone with multiple contacts?
3
Google Voice delay when calling my phone
3
Facebook not letting me add phone number, says it's invalid
2
Make Facebook status updates visible to everyone (Public) except to a list of friends