Put the timestamp of last edit on master sheet, next to edited sheet's name

I'm trying to come up with a script that will print a timestamp of the last edit made to a specific tab within a google sheet. Imagine you have 17 retail stores, each one having its own tab with a set of data. Each time someone makes an edit to that sheet, I want it to print the date of most recent edit on a master tab that has a row with each store name. 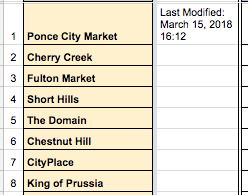 Here's what I have, but it's not quite doing what I want it to do:

The current issue is that it will print the timestamp any time an edit is made anywhere on the file. It is not localized within the Ponce City tab (for example). In the subsequent lines, the tab name and print cell (C5 in this case) will change depending on which tab its pulling from. This way, the last edit made to the store's tab will appear next to the stores name on the master sheet.

I think this is the logic you were trying to express.

Not the answer you're looking for? Browse other questions tagged google-sheets google-apps-script google-sheets-timestamp or ask your own question.

1
Change a working function from onOpen() to onEdit()
4
Timestamp Google Drive's "last modified"
4
Google Sheets Script Editor action not applying to all sheets
0
onOpen Simple Trigger Failure
1
Dynamic generation of sheet name from cell content (cell contents from importrange)
1
=Query Function from another sheet based on a cell Value
0
How to Copy Cell Value and Format From One Tab to Another Using a Formula?
0
Is there a way to add a new sheet tab to a Google Sheet based on the timestamp date?
1
Looping through multiple tabs in multiple google sheets