How do I delete very old photos from the "Insert Photo" dialog in Gmail?

There was a time when it wasn't obvious to anyone that Google Hangouts was archiving all photos sent to and fro, into albums (much like Whatsapp). The Internet generally believed that Google wouldn't be so careless as to make private messages and pictures appear just anywhere unexpectedly.

Well, we weren't exactly wrong, but when you try to insert a photo in Gmail with this here...

I attempted to delete all traces of these photos by going through menus in Google Hangouts, Google+, Google Photos, and Google Drive, and I still can't seem to find where the older photos are stored.

How can I delete older photos that appear in the Insert Photo dialog of Gmail?

Log into http://picasaweb.google.com and you should be able to find older photos that you don't find in Google Photos. Delete the pictures from there.

Source (someone else with the same problem):

I'm self-posting this question and answer despite the following thread...

...because there the question is about profile photos, which people may overlook if they're not concerned with profile photos. Also, that thread didn't appear in my Google search, so hopefully this reformulation does better with SEO.

Howdy I am trying to delete an image still showing on Gmail "insert photo" dialog. Said image was dated March 21, 2012. I´ve tried finding that image within Picasa or Google Photos without success. I have also tried "has:attachment" within Gmail and the same as above. 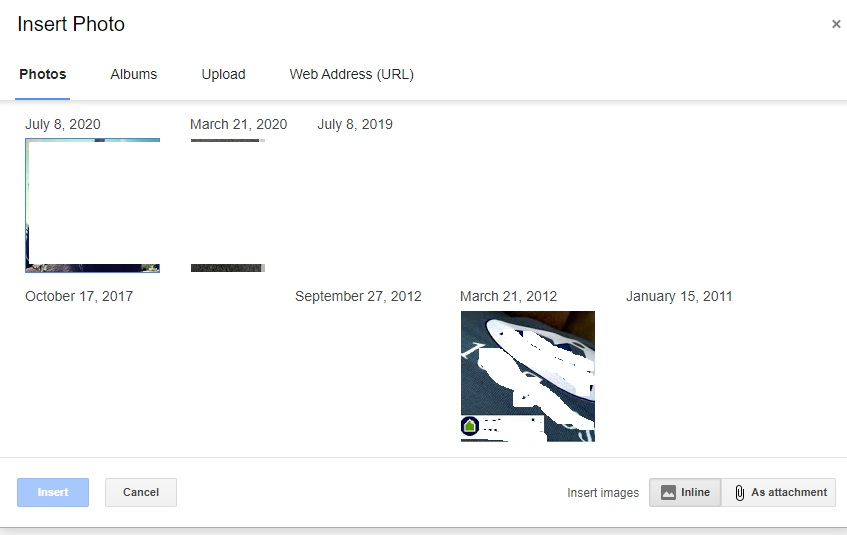 That´s the picture (March 21, 2012) I want to have deleted (had to block the image for privacy purposes though).

I´d appreciate any help. Thanks in advance.

Not the answer you're looking for? Browse other questions tagged gmail privacy photos or ask your own question.

2
How can I transfer Photo projects from one website to another?
2
Make photo tags visible in my profile without including old photos
3
How to delete other people's Gmail profile picture?
0
How to I delete my Gmail photo
1
How do you change the Twitter profile photo on Tails OS?
0
Edit or delete contacts in old version of Gmail
3
How can I insert a video from Google Photos into an email using Gmail?
1
Old profile Gmail photo keeps appearing randomly