Bulk-assign cards to members in Trello

I often find myself having a bunch of cards, and needing to assign them to a team member. This is how I do it:

That is five clicks per card, I need to assign to somebody - quite cumbersome.

Is there a better way to assign members?

In contrast, when I need to assign a label, I just hover over it and click a shortcut (number 1 for green for example). It is super fast and very elegant.

Ideally, I would like to have shortcuts for each member, like I do for each label, and just hover+click shortcut.

Until Trello supports better bulk actions, you have a few options.

Here's how that works in action

If you know who needs to be assigned to cards in advance, you can import cards into Trello using the native Email to Board functionality. 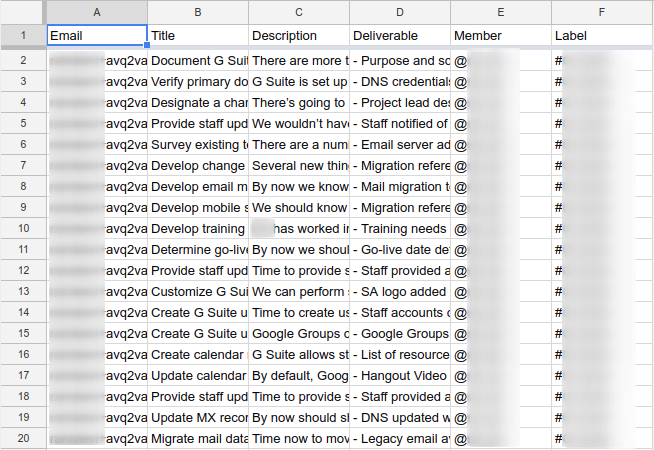 Here's an example using Gmail and Google Sheets to bulk import what's in the spreadsheet. You can also use Thunderbird with LibreOffice Calc, or Outlook with Excel, etc.

If you are using Google Chrome, you can buy a license for Multiselect for Trello a Chrome extension that makes batch actions on Trello easy.

Here's that in action

Try hovering the card with the cursor and then hit 'Space' on your keyboard to assign yourself or 'a' to open a dialog to select a member. Saves at least opening the card and closing it again.

I have not yet found a native bulk action for that.

I found a trick using a rule. I was, in fact, interested in adding myself to every card added to a certain list. So I added a rule:

(you can also do "add member @... to the card" if you want to add another member)

This will assign you to any new task on that list.

Now, the trick is that you can also reuse this rule for existing tasks: just move them to another list, then back to where they were. That makes 2 drag-and-drops per card (if you want to preserve the original card order, it may require a little dexterity though).

You can also press the keys <> or ,. to move the card under the cursor to the left/right quickly, but be careful, if you press twice without moving the cursor, it will move the same card. So you need to move the cursor a little before pressing <> or ,. again.

Note that there is a small lag before the rule applies, so you won't see the member icon appear immediately. But it will eventually.

If you do not want to keep adding members to new tasks, remember to delete the rule!

Not the answer you're looking for? Browse other questions tagged trello or ask your own question.

27
Merge cards in Trello?
2
Adding members Trello
4
Down voting cards in Trello
0
Trello procedure to list cards then organize them into new groups and assign as a task
3
How to assign all members at once in Trello's card?
9
Find Trello cards by number
12
Does Trello support auto assign?
2
Trello cards menu
9
On Trello, members of my organization can't move cards to another list?
7
Custom label order?