How do I view replies to tweets?

I cannot figure out how to view some replies to tweets. Please correct any incorrect statements I'm making:

In the screenshot below, a tweet was made by George, and there were 2 replies (I know that because of the icon that's circled in blue). One of the replies was made by Joe. Joe's tweet had 1 reply (circled in green) - the one made by James.

So far so good - James' reply is shown by default. But the other reply to George was made by lepton939. lepton939 had one reply to his tweet (circled in red). No matter what I click on, I can't see that reply. How do I do it? 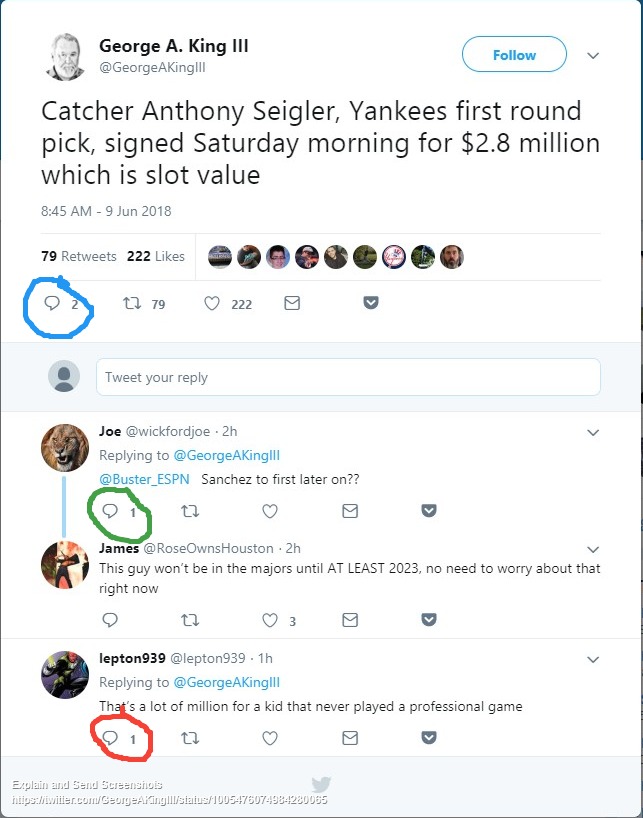 There is generally one of two reasons for not being able to see a reply to a tweet:

1. The reply was deleted.

If someone replies to a tweet and then later deletes that reply, the reply itself will be deleted, but the number of replies won't decrease. So if eight people reply to a tweet and seven of them delete their replies, the original tweet will still show that it has eight replies -- but you'd only be able to view one.

2. The person who replied has blocked you.

You may be blocked from seeing tweets by the person who replied, in which case you could see the number of replies, but you wouldn't be able to view any replies by someone who has blocked you. An easy way to see if this is the case is to copy the link to the original tweet, log out of Twitter, and see if you can view the reply then.

There could be other reasons why you can't see the reply, as well -- the poster has a protected account, you've muted the poster, etc. -- but these two are the most common.

3
View Twitter feed without seeing @ replies?
3
See replies to tweets from people I'm following
2
Twitter etiquette for hashtag stream
4
My reply to a tweet doesn't appear below the original tweet when it's expanded
5
How can I view just the tweets of my followers?
0
My Twitter replies now showing on my Tweets page
2
Show only tweets in TweetDeck (exclude replies)
17
How do I disable the “interesting tweet” notification type on Twitter?
0
View Tweets from a specific country?