Is there any way to check many tags' popularity on Twitter?

My attempt is to make a search and see how many tweets we got in the last 24 hours.

But this is very slow.

Is there any tool to check a lot of these tags?

The easiest way, but not always the best, would be to use the Twitter app for either iOS or Android. In either of those two Twitter apps, tap Search and type in your hashtag -- for example, #friday.

A list of approximate hashtags will be returned, with popularity numbers for each hashtag -- generally, "x Tweets today" or "x Tweets in the last hour."

As you can see in the image below, #friday is not as popular as other hashtags with the same first word, so its stats aren't shown. Stats for other, more popular hashtags are shown. For those hashtags, this technique will work. 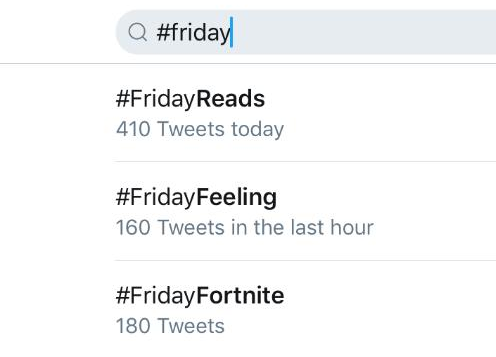 To get the statistics for other hashtags, you'll probably need to use a third-party program or app. See the links below for lists of third-party tools (some paid, some free) that will display hashtag popularity stats.

4
Is there a way to show how many people are following me on Twitter and a standard “Follow me on Twitter” button?
3
Getting ALL the tweets ever tweeted by the world
14
Is there any way to claim an abandoned Twitter name?
5
Disable twitter's keyboard shortcut
17
How do I disable the “interesting tweet” notification type on Twitter?
1
How to get around Twitter blocking text search within page (“find in page”)