SUM a range of cells (sometimes string, sometimes numbers), parsing the cell if it is a string

works for parsing strings into numbers and SUMming them, but because of regex, it ignores anything that is not a string (ie, already a number). An example set of data might be:

The result of which should be

Using the above formula though, the values of B2 and B5 are ignored, as they are not a string, and so regex will not parse them

Is this possible, or would it end up just being completely convoluted?

column B will be converted to TEXT values with keeping number format "#.##" and then extracted numbers are treated with SUBSTITUTE to replace . with , (otherwise result would be rounded to 2730) then it's fed to ARRAYFORMULA and to get rid of #N/A error from blank cells, all is wrapped in IFERROR and finally summed with SUMPRODUCT returning requested 2731.31 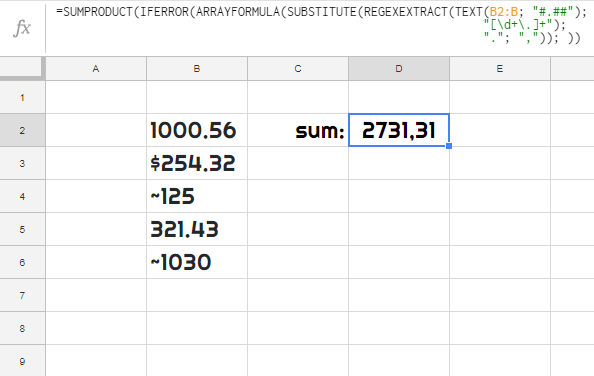