Formula in Column G using an INDEX and MATCH:

Which all works fine until the values in Column D are the same and the formula in Column G repeats the first value it comes across in Column C (see attached file).

Anyone have a solution for when there are duplicate values in dynamic sorting? 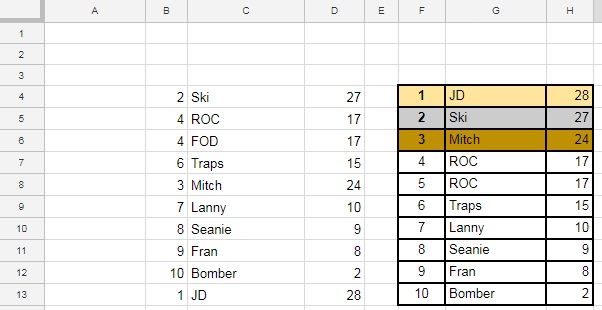 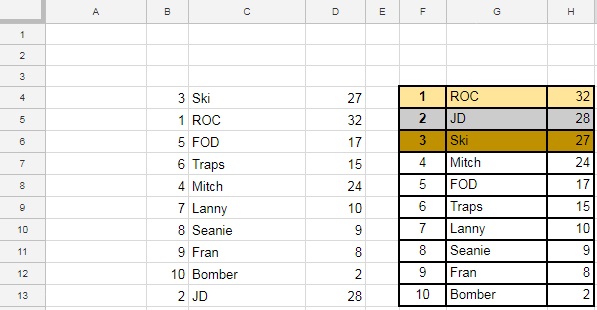 The problem to be resolved is that neither the RANK command, nor the formula in column G are designed to recognise and avoid a duplicate values.

Both ROC and Fod both scored 17, but there is nothing to distinguish between them.

Thankfully Prashanth at infospired.com recognised the underlying problem and solved it in "Flexible Array Formula to Rank Without Duplicates in Google Sheets".

Here's a link to my worked spreadsheet.

Here's a screenshot of Fergal's data versus my version (using the infospired solution). 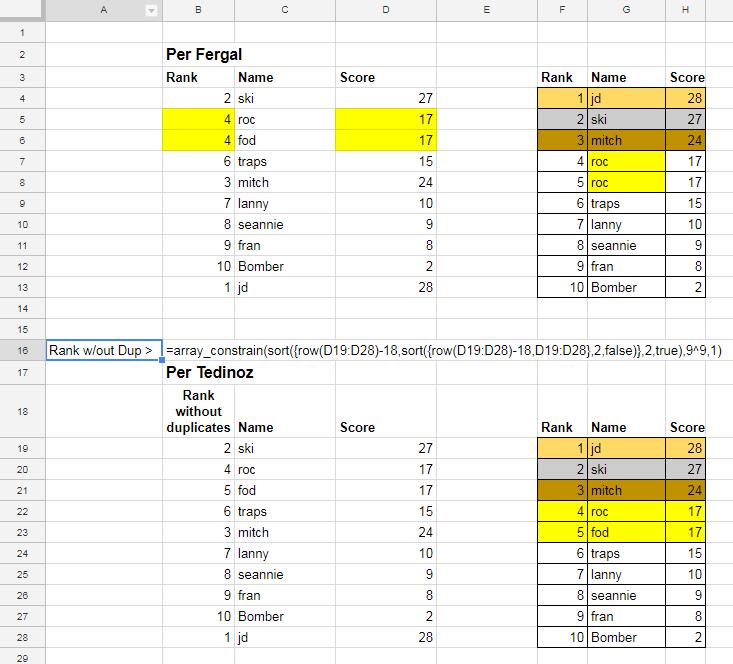 infospired created a new formula to create a "Rank without Duplicates". This is the formula in the screenshot:

This is a complicated formula, but becomes easier to understand when it is broken into its component pieces. There are three steps:

Sort#1 - sort({row(D19:D28)-18,D19:D28},2,false)
There are three steps
1 - Get the column of raw scores (as-is)
2 - Create a new column consisting of the numbers 1 to ten (inclusive), and assign one number to each score. Note this isn't ranking, it's simply assigning numbers to each score with no duplicates. The numbers are created using ROW with this code row(D19:D28)-18. "row(D19:D28)" would create the numbers 19 to 28 but there is a second element "minus 18". This has the effect of deducting 18 from each row number; so instead of creating number 19, it creates number one (nineteen minus eighteen); two instead of twenty; three instead of twenty one; four instead of twenty two and so on.
3 - User SORT to sort the columns by score descending. 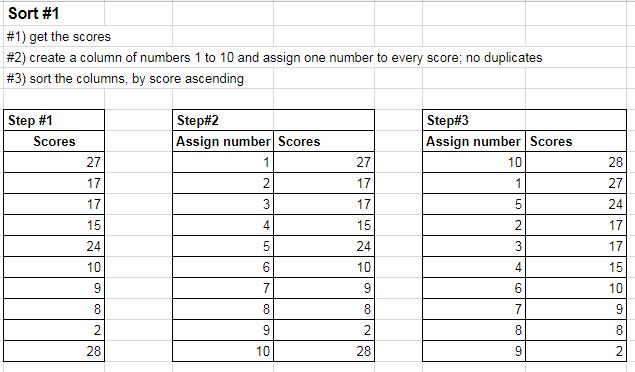 Produce the ranking This step uses the ARRAY_CONSTRAIN command . The output is an array.

The final table can be created using VLOOKUP commands for both Name and Score. Base the lookup on the Rank, and use the Rank, Name and Score table as data to be interrogated.

4
Sorting unique rows by a related SUMIF column
9
How can I filter a full table based on only unique values in a single column?
2
index() match() join() I want to show all duplicate results disregarding their order
3
Add additional lines to Google Sheets Line chart
1
How can I duplicate two cells from a column to rows in a particular order
1
Arrayformula for entire column in Google Sheets with a lookup not working
0
How to remove duplicate rows based on a column (leaving first one out) in Google Spreadsheets
0
How to use arrayformula to find and get data from only a certain, dynamic set of columns?
0
Copy data based on date to another cell but other column date is not exact match