There are no duplicates in A:F - double checked.

Function is set on Calculations!K:K

Placing the following array formula into Calculations!K1 will fill the column with a match where one is found or with the raw value from Calculations!C:C where no value is found on the Image! sheet:

Understand that array formulas take the space of the entire row, not just one cell. So if you use the array formula in K1, the entire column will be used by that formula. This means that you can not directly edit any cells in Calculations!K:K. If there are values you want to change, you will need to add the value of whatever is in Calculations!C:C for that row into the grid in the Image! sheet.

An explanation of the formula:

The IFERROR formula will catch where anything is not found in the Image! sheet. The default if that happens is found at the end of the formula — C:C — which just means "Copy over into this column whatever is in Column C for this row."

If the row number the ArrayFormula is assessing is Row 1, just put the word "Product" (i.e., the header for the column goes in Column K Row 1, or K1).

If the row number is NOT Row 1, then check to see whether the cell in Column C for the current row is empty. If it is, also put a NULL value in Column K for that row.

If the row is not row 1 and the value in Column C is not blank, move on and VLOOKUP the value in each remaining row of Column C. I'll get to the second part of this below, where the blank appears above, but we're going to form ONE long two-column search range there. The VLOOKUP will search for the value from Column C in that two-column range, searching the first column and returning whatever is in the second (2) column. The VLOOKUP ends with "FALSE" which means that the range we will be searching is not in order numerically or alphabetically.

There are five similar QUERY calls placed one after the other and separated by colons (;). The colons tell us to stack these QUERY results on top of one another. These QUERY results won't be seen; they will just be held by Google Sheets as an invisible range to search in the VLOOKUP.

The first of the five inner QUERY formulas will pair Image!B:B beside Image!G:G, leaving out any pairs where Image!B:B doesn't contain a long name. This will give us a compact invisible list pairing [long product name | short product name ].

You'll notice an outer QUERY wrapper surrounds the inner five QUERY calls. This is just used to group each of those five separate arrays into ONE single array in the invisible world behind the scenes. We need it to be seen as one long QUERY instead of five stacked QUERYs, so that the VLOOKUP understands it.

This formula will will serve the purpose. Copy this into Cell K2 and copy down the column.

There are a couple of issues which complicate this solution.
First - the value in C2 ("Clean Title 2") could be in any one of five columns in the "Images" sheet. So a conventional VLOOKUP is not going to suit.
Second - the information on the "Images" sheet is not sorted in any way.
Third - and this is only clear after some analysis, a match does not exist for every value of C2.

The questioner used this formula.

There are a few problems with this.
First, a colon, instead of a comma, precedes the Column Index.
Second, the lookup range commences with A and the Column Index is one, so this will always look for C2 in ColumnA - and no such match exists.
Third, the default [is sorted] parameter applies (=TRUE). In a scenario where the data is NOT sorted, VLOOKUP will simply return the the nearest match. But this isn't good enough. When the [is sorted] parameter is set to TRUE, every cell has a match; when [is sorted] is set to FALSE, there are NO matches. 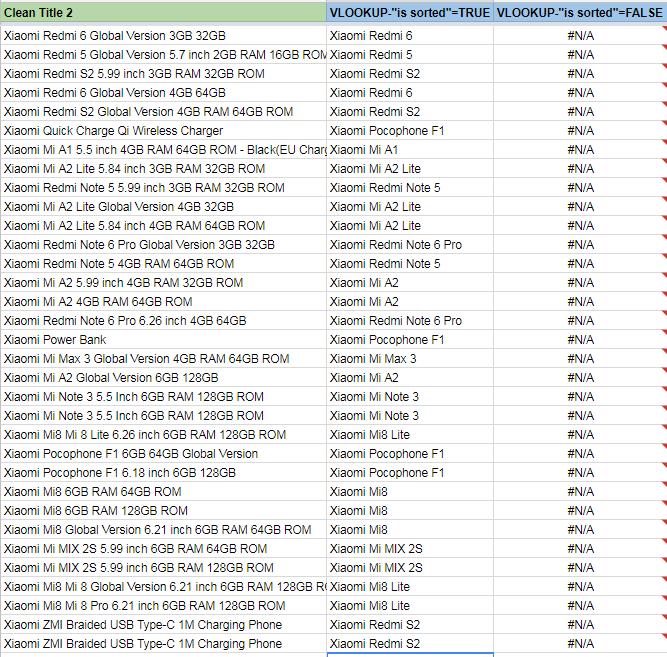 In the screenshot shown below, I've included a column showing the results of the QUERY, as well as the VLOOKUP result for each of the five columns in "Images".
There are a couple of things to note:
1 - There are four products (Highlighted in RED) where there is NO match for "Clean Title 2".
2 - The VLOOKUP results show that the "Clean Title 2" could be in any one of four columns. There are, as the questioner noted, no duplicates.
3 - The query results match the various VLOOKUP results exactly, which confirms that QUERY is a good way to find a match in this scenario. 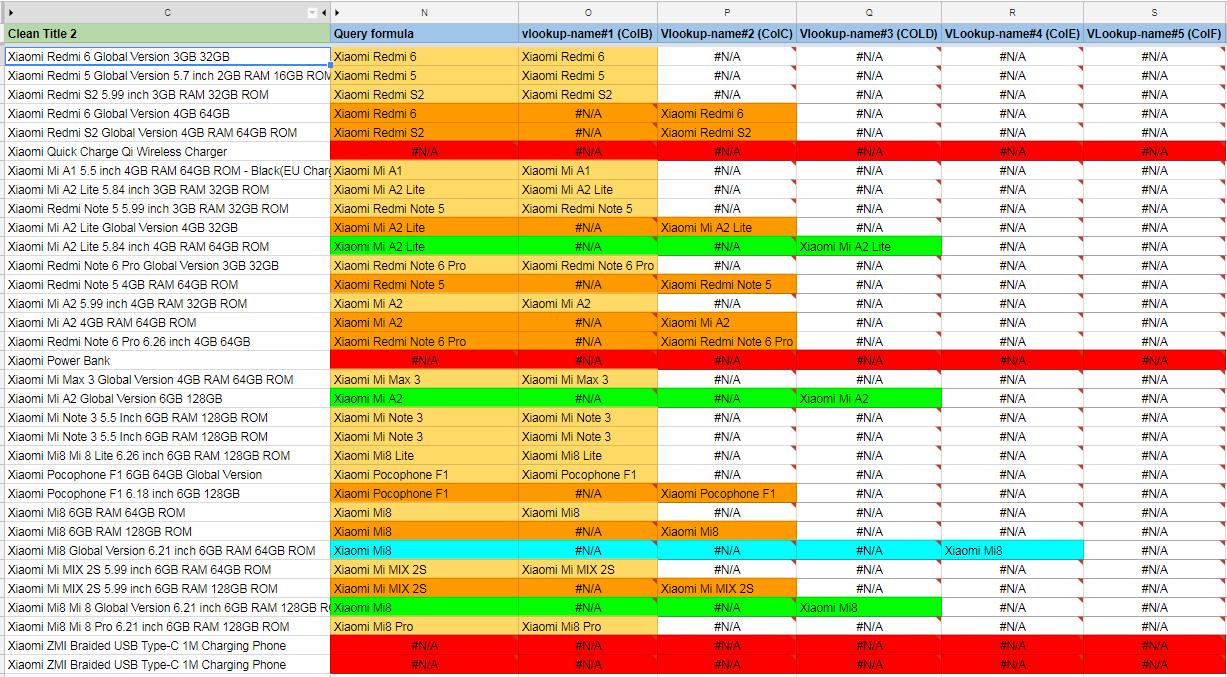 6
How to make SQL CROSS JOIN of two tables with Google Spreadsheet?
5
Filter a range by both Row and Column criteria in Google Spreadsheets
1
Google Finance / Spreadsheets
0
How to combine 3 sheets into one using QUERY(IMPORTRANGE)?
0
Convert from duration ( HH-MM-SS) to minutes
0
How to fill columns automatically when a new row is added
0
IMPORTRANGE QUERY formula filtered by dates range and values from cell