I'm seeing more and more occurrences on Amazon of the following phenomenon: a product with good ratings (usually 4/5+) has reviews that refer to a different product. (Sometimes this happens for brands that have a large number of products, rather than for random drop-shippers.) For example, this USB-C hub has reviews talking about its solar charging capabilities. 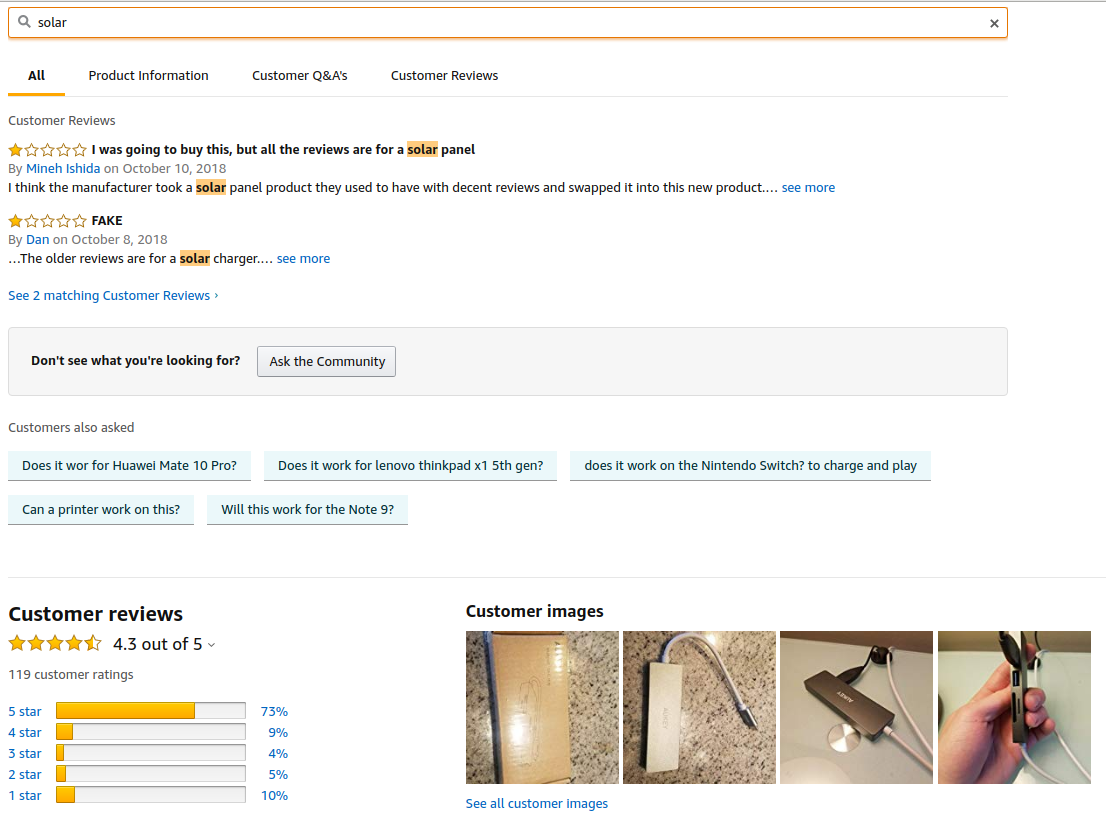 UPDATE The practice was called "review reuse fraud" in this Buzzfeed article:

The mismatch between the product and the review may appear random, perhaps a glitch, but it’s a deliberate tactic Amazon sellers use to accumulate reviews. They take an existing product page, then update the photo and description to show an entirely different product. By retaining all the existing reviews, the new product looks more tested and legitimate to shoppers — and in the world of online reviews, quantity is key. More ratings make a product appear to be more well-reviewed and, ultimately, boosts sales.

A single page can be manipulated multiple times over the years. Based on the reviews for a hair-straightening brush sold by AsaVea, the listing was for an SPF 30 lotion in 2006, and then a deodorant in 2010, and then a St. Ives face scrub in 2012, and then a mascara in January 2018, before ultimately becoming a hair-styling tool.

Longtime Amazon customer Marat Nepomnyashy was scrolling through his Amazon purchase history earlier this year, when he noticed pictures of products he didn’t buy. He clicked on the product page, and was surprised to discover that an extended battery he bought in 2014 was now a ZeroLemon clip-on Bluetooth speaker. “I realized that the product sold has been switched, and my positive review was now promoting this new product that I had nothing to do with.”

After talking with Customer Support, I found out that the most direct way of reporting swapped product listings is to email cs-reply@amazon and mention the product's ASIN.

Not the answer you're looking for? Browse other questions tagged amazon or ask your own question.

2
Why are Amazon reviews under the wrong product?

5
Amazon Questions and Answers - does Amazon email owners of the product?
0
How to list by only Amazon product?
2
Why are Amazon reviews under the wrong product?
7
Advanced Power Search & Filter of Amazon product data & description beyond Books?
3
Search only in the product title on Amazon
0
Why doesn't my product review on Amazon show all photos?