Google Docs has a feature called "Suggesting" which is similar to Microsoft Word's "Track Changes".

In Microsoft Word, once you have made your changes there is an option to view the file with "Final".

"Final" will show you the document as it would be if all of the proposed changes are agreed.

Is there something similar to this in Google Docs? The only other option I can find in Google Docs is "Viewing" mode, but this does the opposite of Microsoft Word's "Final". "Viewing" just shows you the document if all of the proposed changes were not agreed. 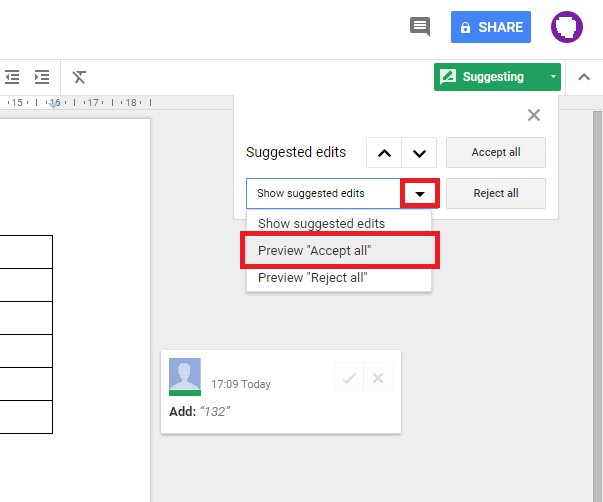 Not the answer you're looking for? Browse other questions tagged google-drive google-docs or ask your own question.

11
Finding the changes within a Google Doc's revision
11
How to convert a Microsoft Word document to Google Docs format without having to download and re-upload again?
2
How to track viewership in Google Docs?
1
Display Google Docs in Compact View
5
Is it possible to set Google Drive to open Google Docs above a certain age in Viewing Mode automatically?
10
Does Google Docs support variables?
1
Can Google Docs auto-correct capitalization?
8
Send readers of Google document to “Viewing” mode instead of “Suggesting” mode
4
Let changes be accepted only by admin in Google Docs