Whenever I search for the meaning of a word, the suggestion "in hindi" and others appears on Google

What the title says. For instance, searching on google.com/ncr (no country redirect): 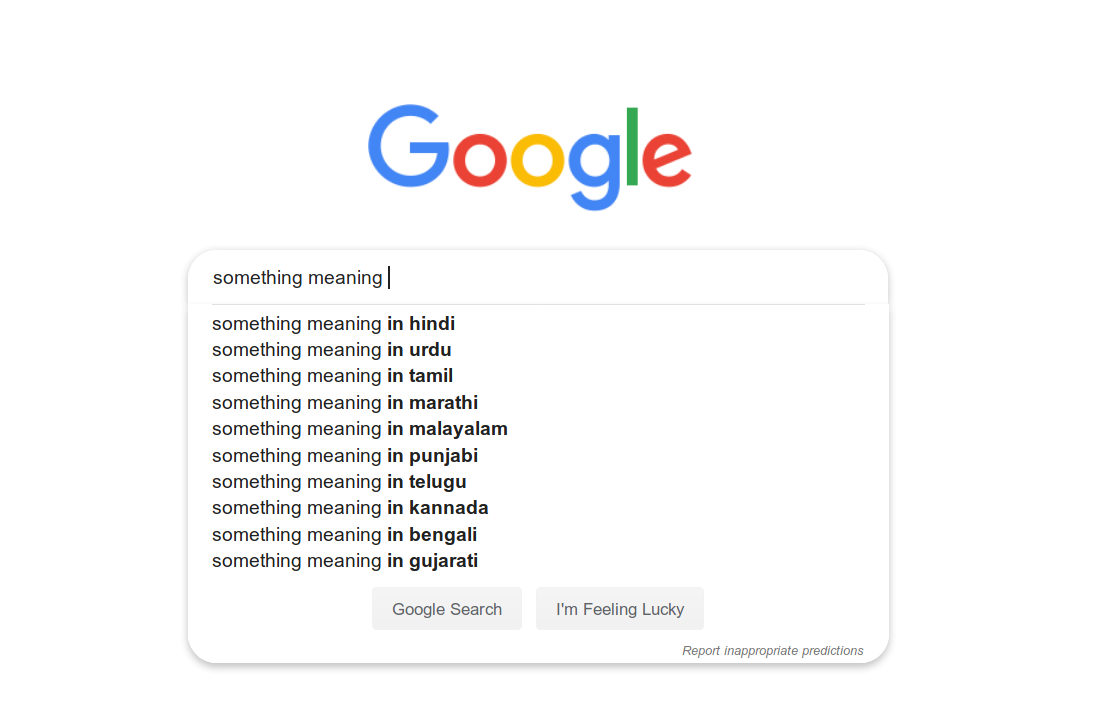 I speak none of these languages. I'm searching for the meaning of an English word, using English terms, I expect answers in English. Leaving apart questions of why are these Google search suggestions so stupid (specially considering I never click any of them, I never open pages in these languages and I know Google still tracks this despite my best efforts, and it also knows I'm nowhere near India or Pakistan etc, but still it won't learn), what can I do to block these, apart from blocking search suggestions entirely by means of an ad blocker?

I've seen a very similar, almost duplicate question (Remove Google Search suggestions) but that one asks about Chrome's omnibox and is also open to other languages that the OP is familiar with. I'm personally not interested in any language other than the one I'm using to write the search query in.

These are predictions of Google Search algorithm based on rank (frequency of global searches) and all you can do at this moment (apart of Adblocking them) is to report them back like: 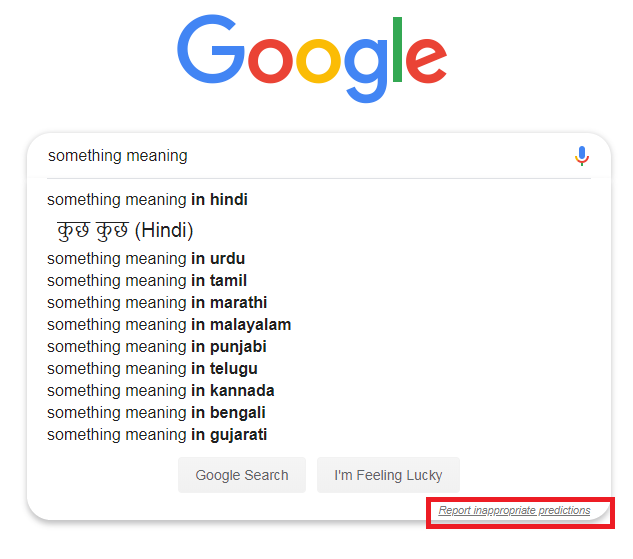 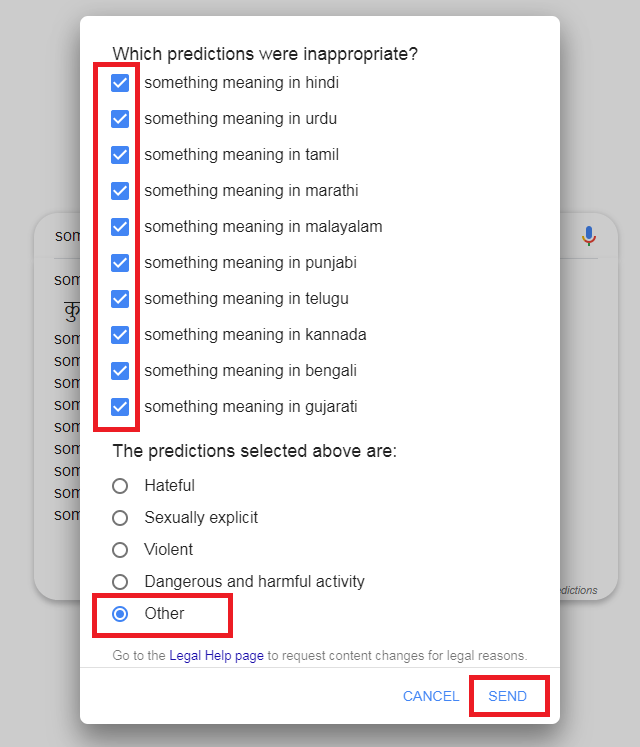 As for the reason why all of them are languages spoken in India - with a population of over 1.4 billion people India has no national language. The Constitution of India designates 22 official languages (out of 60!). These are:

Applying simple math to it, there is a lot of millions of people searching daily for word meanings especially when some of these languages are nothing alike (meaning wise - in all meanings).

What can I do to block these, apart from blocking search suggestions entirely by means of an ad blocker?

Block them with a prefix if you are doing a bunch of similar searches, or a suffix if you want to see what comes up prior to blocking. This disables alternative language suggestions:

Notice that prefixing or suffixing your terms still offers suffixed suggestions. The shortest term you can use seems to be: "Engl something meaning", if you need more room on the input line, but it results in the same output line length.

Getting a bit semantic, but the grammatical phrasing of your query is mostly to blame. See, the meaning of a word does not change when it is spoken in another language. "Equipo" and "Team" both mean the same thing. What you want to know is "how to say it in ____". And since Google realizes you don't have to type out "how to say it" every time, they make it easy to query that in as few characters as possible. Your query should be: [WORD]+in+[space].

Of course, certain terms like "chilaquiles", "research", or "program" will predict results like in chili in a crockpot, in psychology, in Python, rather than spoken languages, but you get the idea. 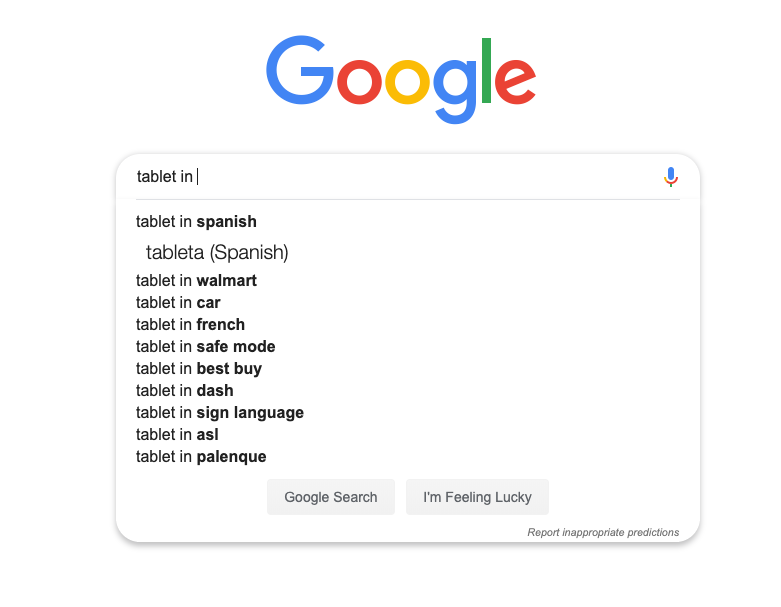 For the time being, I came up with the following adblock rule:

But for me at least, this will do fine. 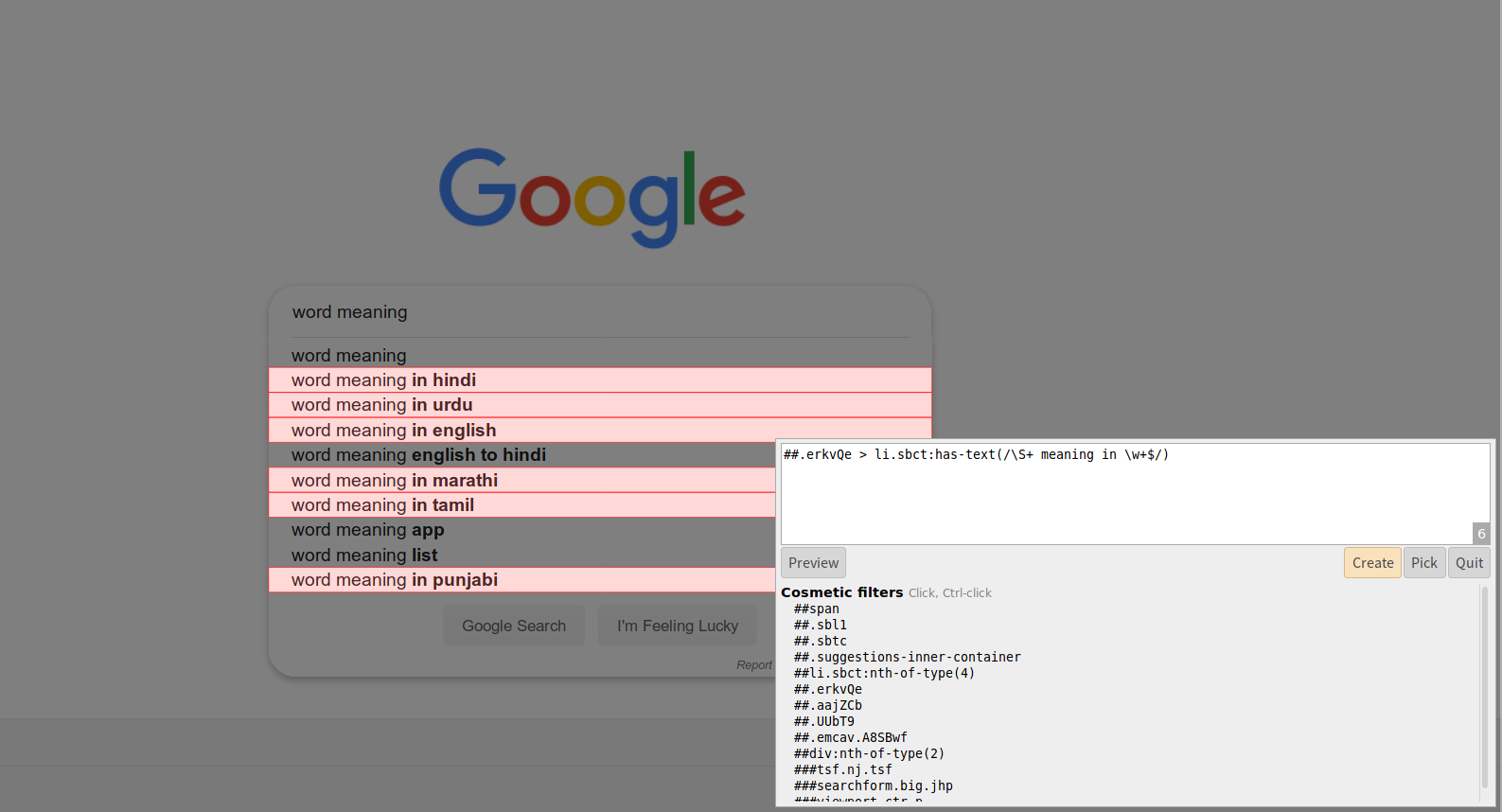 8
Date criteria for Google search
11
Does word order matter for Google Search?
1
anyway to customise google search such that whenever we click on a link it will automatically create a new tab
8
How do I force Google Search to use the word I type with no "corrections"?
6
What are the differences between localized and encrypted Google search?
6
Search for multiple unrelated words in Google Search
3
Search Pinboard and Google at the same time
1
Search for specific text at the start of the URL in Google search
4
How to set English and Prevent others in Google when ncr/append-en/... fail?
1
Google Search: Queries with AND and OR