Google sheets dynamically populate cells based on single cell value. I don't know what the term would be called and a bunch of searching hasn't resulted in any lead on what it would be called.

What I would like to do is populate X number of rows with the formulas based upon a cell that has the number value of X.

An example would be an amortization sheet for a loan. If you have a cell that contains the term years 15 that's 180 periods (15*12). The formula is the same for each column and dragging them down 180 rows would give me the same results it would auto-populate the cells. If I then changed the term cell value to 30 years loan I would have to drag it another 180 rows for a total of 360.

Instead, I'm trying to figure out how to have the sheet auto-fill the values based on the term cell number. It would then auto-populate the rows based on that value.

What is this term called or how could I go about doing this? Do I need to create my own macro in the sheets script? 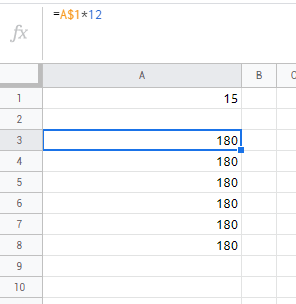 if you don't want to play with dragging you need to use array formula: 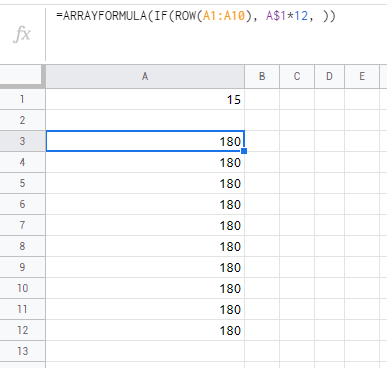 1
How can I set the increment value for Google Spreadsheets to auto-increment?
4
Google Sheets: COUNTIF with dynamic criteria
1
Writing a macro to create a new tab and name that tab based on a cell value in Google Sheets
2
How do I populate cells (with formulas) from one google sheet into another while using one as a search key for the other? If C=This, State D
1
In Google sheets, how do I have a cell return the value of cell A, based on the values of cells B, C and D?
1
Google Sheets formula working in only some cells
1
Copy value from another column based on cell value
1
How can I render a Google Sheets Cell's value in a Google Doc?
0
Finding if a value exists in a cell containing comma separated text
1
For Google Sheets, what is the function that will populate a cell with specific text when pulling data from multiple tabs of another sheet?