How can I email an unresized image via Gmail?

I'm trying to email as an attachment to my iPhone a large image from my PC via Gmail. Its original size is 3840 x 1080 pixels (5.57 MB). At first, when I received the image it looked very bad on the phone (for which I blamed the iPhone). But then purely by chance, I had to email a similar image to my PC. After which I realized that the image was badly cropped down to 1280 x 360 pixels when I received it.

Is there a way to make it stop messing with my attachments?

After you drop your image into the body of an email, left-click on it and select Original size. This way the size, resolution and quality won't be anyhow altered. 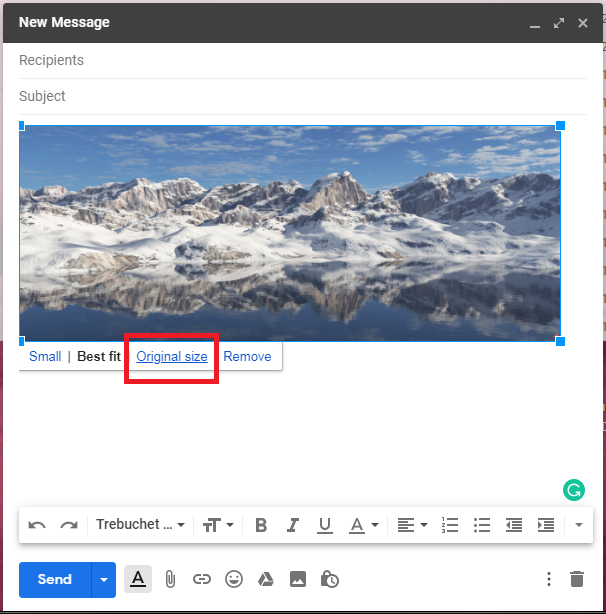 "I was sending it as an attachment"

The provided answer is true when adding/dropping an image directly into the body of the email but has nothing to do with attachments.
We electronically sent images to people all the time. We never had an issue like that before when sending as an attachment. There must had been something else there.

In any case -as an alternative- if still in doubt, you can use one of the many free transfer services.

These services have become our standard electronic "courier" when it comes to any kind of file sharing big files.

Not the answer you're looking for? Browse other questions tagged gmail images gmail-attachments or ask your own question.

5
Does Gmail support image maps?
33
How can I send a Windows executable via Gmail?
2
Better photo viewer for GMail photo attachments
4
How can I upload images to Google+ via email?
2
How can I embed a local image in gmail without using an external link?
3
How do image attachments affect Gmail quota?
40
Can one delete a Gmail attachment but keep the email?