Calculate hours worked but not limited to a single day

I'm trying to automate getting the number of hours worked for a session, not a day. My raw data is the following:

Here is a sample spreadsheet for the data

I was able to create a formatted version using the following code:

For now, I get the number of hours worked by just getting the difference between the two times (the MAX and the MIN)

The problem arises when users log out early the following day (12AM or 1AM). Since the current formula only detects the entries for a single day, It cannot accurately calculate the persons number of hours worked. 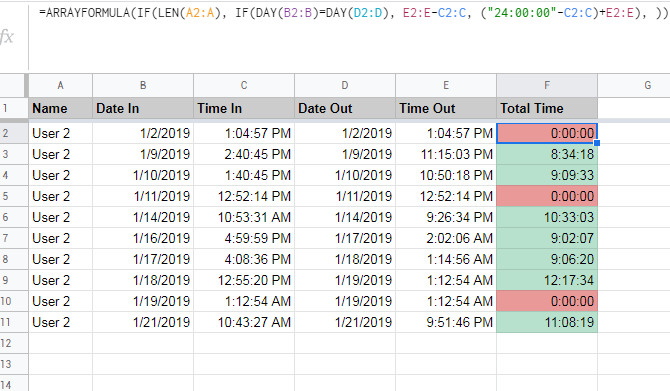 Not the answer you're looking for? Browse other questions tagged google-sheets formulas google-sheets-arrayformula or ask your own question.

0
Automatically calculate overtime hours
0
Calculating time worked per day
2
Getting the highest values for each day
2
QUERY error for BY column
0
Calculating Ranks in Google Sheets
2
Calculate Work Hours
2
Combining IMPORTRANGE, SUMIFS, QUERY with cells that contain numbers and text
2
How to shrink lists of strings so that all consecutive values are represented by “A to D” instead of as “A, B, C, D”
0
Determining type of hours worked past certain time of day