People who code: we want your input. Take the Survey

How can I avoid INDEX MATCH on google sheets?

I find the syntax of index match convoluted, and difficult to read. (And in general I dislike nested functions. What workarounds are there when the lookup column is on the right of the answer column?

I had the following situation: 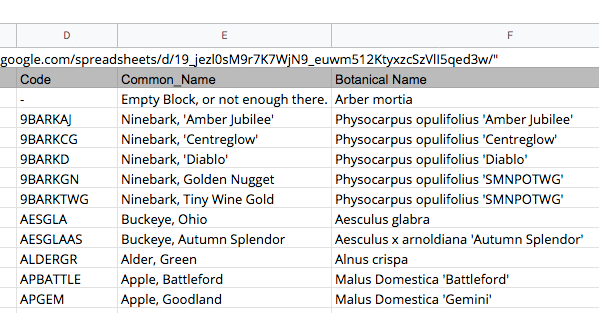 I had the botanical name. I wanted the common name.

(By using a prefix from the sheet name, all of the named ranges for that sheet are together in the NamedRange panel.)

Now Google Sheets allows the creation of arrays on the fly. So I can use the syntax of VLOOKUP, which to me is more straight forward:

Now I didn't have to define named ranges for this. I could have done it like this:

The named ranges help me understand next year when I have to hack this again for my suppliers new format.

But named ranges give me another win: They adjust if you move them. I can insert a column between E and F.

The downside of Named Ranges: You can't really define them using E3:E syntax. Oh, you can define them that way, but they fill in the rest of the column part with the current last row. This has occasionally bitten me.

A comment asked my thoughts on query & custom functions.

Query has some awesome properties. The problem with it: the full query runs anytime any of the source data changes.

It uses an a different syntax for the query itself, with extensive escaping and quoting. It does not adjust gracefully to changes in data structure of the source.

1
INDEX MATCH in array formula
5
Google Sheets: can't sort table that use INDEX and MATCH?
2
Using MEDIAN with INDEX/MATCH pair to pick the row where a given number falls in between two values
0
How can I optimize lookups in google sheets?
2
Find column headers then do multi-criteria lookup
1
How to get LOOKUP to do an exact match only?
1
Array formula with index match to return array of matches
0
Display selected row for match in any columns from a dropdown list in Google Sheets
1
How to use HYPERLINK text as the first argument for MATCH?
0
Script to search my Google Sheets for a partial text match in a cell and if it contains a match then clear or delete entire cell