I have utility that I've been working on (modified from an existing sheet) for a Tabletop game I run for my group.

Currently, it generates random items from a list. The name of each of the items has a corresponding hyperlink to the items description from the same sheet.

An editable copy of the generator may be found here.

My goal is to populate a new cell with with BOTH the item's name, and it's description.

So, if the generator returns an item name in cell "C4" with a hyperlink to its corresponding description cell, what formula should I use to populate this new cell (or cells) with both the name, and the descriptor?

Here is an image of the generator, with the hyperlink to the description cell on a different page. 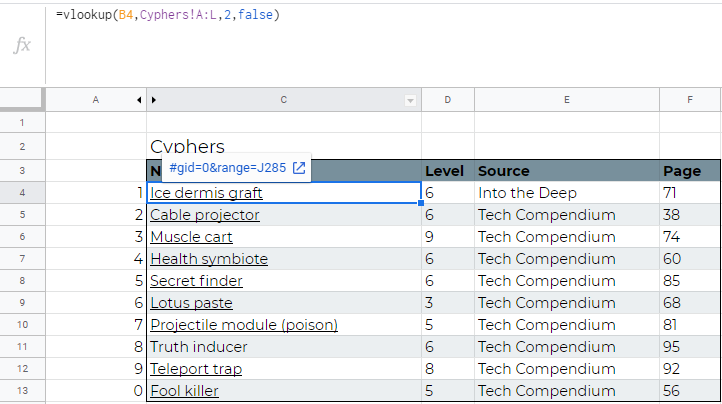 Clicking the hyperlink routes you to the corresponding "Description" cell. [ 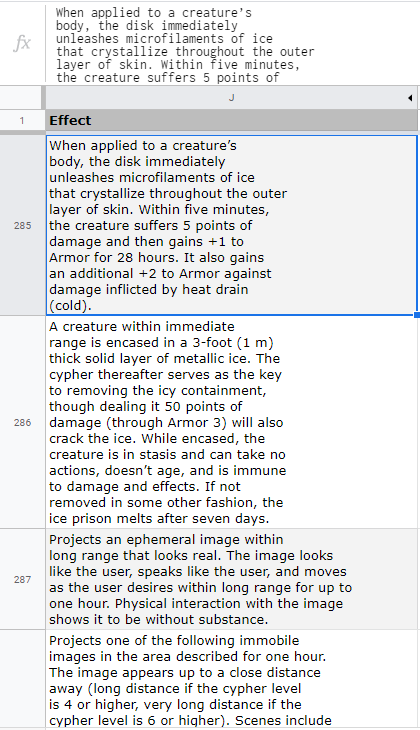 My ideal behavior, is for the formula to insert both the Name and the Descriptor into the new cell.

A visual example of the outcome I'm looking for can be found below. 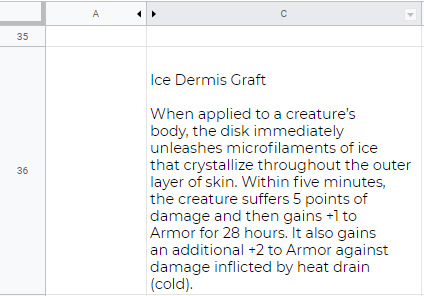 Any advice or ideas would be appreciated.

I believe one of them will suit your needs.

Solution 1
The first one uses an added helper column (M) on your Cyphers sheet. Using this formula we manage to have a single cell with a link as we had in this answer :

The newly added Helper column has the following needed formula:

Solution 2
For the second one we just put together the twice used VLOOKUP function which again produces a single cell but no link this time.

Solution 3
On this third one we use the following formula which returns two separate fields one next to the other:

Solution 4
Finally the fourth solution is very similar to the third one. The only difference is that this time the two fields are one under the other

Pro Tip: Instead of having 4 formulas in cells C:F you can use a single one (look at my examples on the sheet):

Not the answer you're looking for? Browse other questions tagged google-sheets formulas links google-sheets-cell-format or ask your own question.

2
Auto populate data in Google Spreadsheet from data in separate spreadsheet?
0
Use value from another cell in formula
3
Google Sheets Search and Display Location
0
How to create formula for corresponding data across two sheets?
1
Google Sheets, formula, reference to variable sheets
0
Fetch Random String From Array For Each New Form Entry
0
How do I reference a string from a cell in a Google Spreadsheet formula?
0
Pull unique values from other sheets as new sheets keep getting added