Did Gmail's Google Voice Integration Recently Cause a Regression in Firefox?

Up until this week, I was able to share my microphone in Firefox to facilitate Google Voice calls via Gmail.

I run Kubuntu 19.10 and Firefox 73. My question at AskUbuntu (addressing the client-side of this matter), isn't seeming to get much response.

I'm hoping someone here might know of a server-side reason for the fact that Firefox doesn't seem to realize that mic-sharing is necessary to facility a Google Voice based phone call.

This all worked fine until Monday. Even with a freshly installed Firefox (with a freshly generated profile), Firefox seems to be oblivious to the fact that it must share the microphone to facilitate calls.

I'm thinking that maybe Google has updated gmail and google voice this week to some modern standard that Firefox hasn't yet implemented. Before Monday, each time I'd make a call, Firefox would prompt me to share the microphone.

I know of nothing that was changed client-side. Are any of you aware of something that changed server-side this week in Gmail, Google Voice, and Google Hangouts? 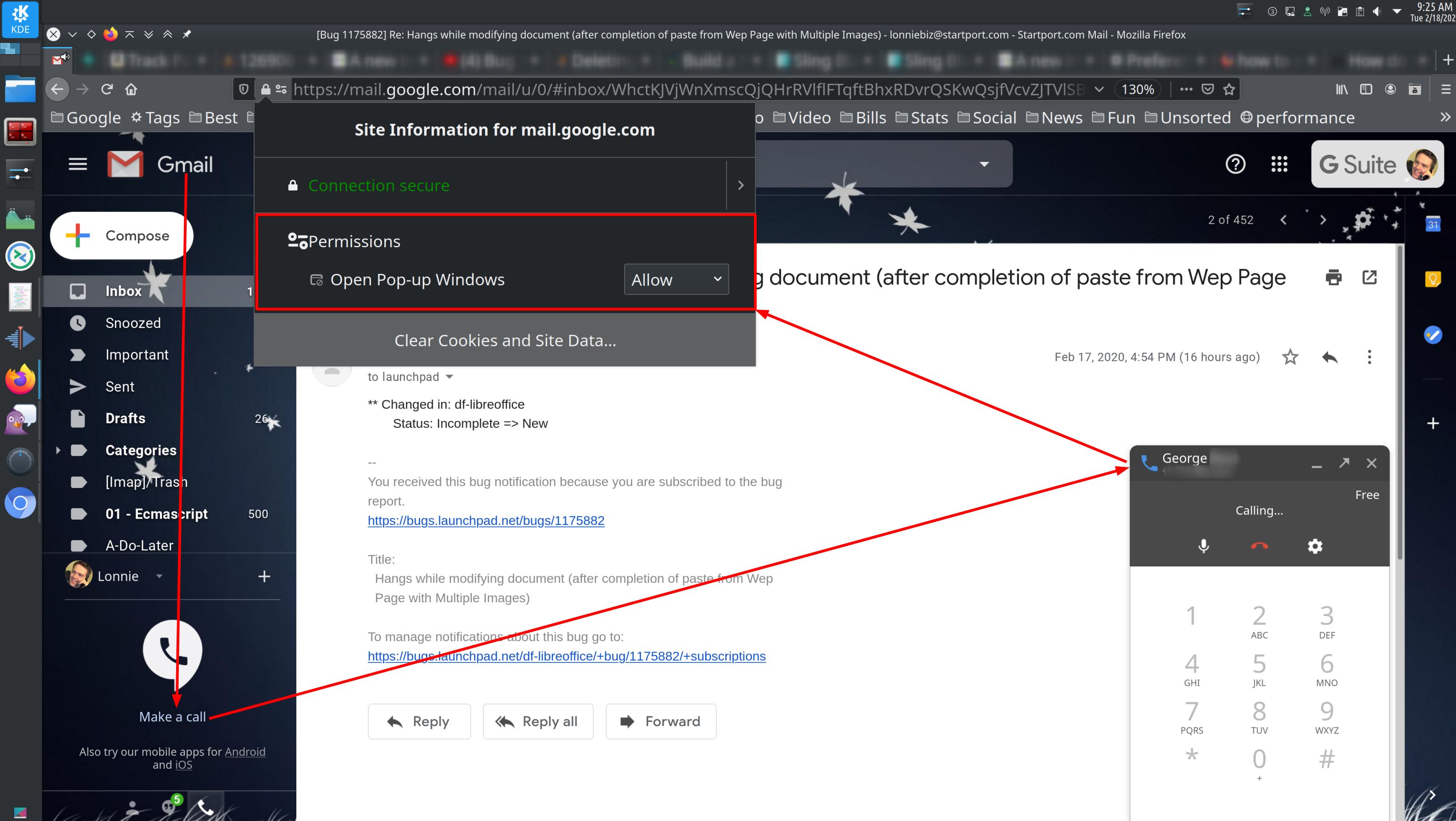 Similar issues here; stopped working and started again. Now not working with Firefox 74.0.1. I've gone back to Firefox 73.0.1. Watch that your system doesn't auto-update you to Firefox 74.

I dual-boot Kubuntu 18.04 LTS and Windows 10 Home. Firefox 73.0.1 works in both for calling from Gmail, prompt for mic, etc. Firefox 74 now gives me the problem and I've put Firefox updates temporarily on hold since going back to 73.0.1. Firefox 74 does get the mic prompt and dial from Hangouts and Voice.

What the problem may be is Firefox not catching the web address of the dialer in gmail which is Hangouts. Also, gotta watch extensions when they auto-update or when switching Firefox versions. Sometimes they don't keep your configuration info. I needed to reconfigure Disable HTML5 Autoplay and Adblock plus when switching.

Two sites I've found useful. The first is for downloading any Firefox version, release or beta: https://ftp.mozilla.org/pub/firefox/releases/ The Linux versions are in .tar.bz2 format

The second is: https://launchpad.net/~ubuntu-mozilla-security/+archive/ubuntu/ppa?field.series_filter= I added the deb to /etc/apt/sources.list and use with Muon Package Manager for upgrading / downgrading Firefox.

Not the answer you're looking for? Browse other questions tagged gmail google-hangouts google-voice firefox voip or ask your own question.

2
Google Voice is being sent to gmail's spam
3
Why do my Google Voice calls get forwarded to another phone when forwarding isn't set?
2
Error in setting up Google Voice upgrade to use mobile phone number (outside the USA)
2
Google Voice integration
3
Google Voice delay when calling my phone
0
Can't call contact using Gmail's voice calling
11
How do I prevent Google Voice from ringing in Gmail?
2
Google Voice with mobile virtual network operator using visual voicemail (VVM) and conditional call forwarding (CCF)