I have the Fruit Count tables on the left. If at all possible, what formulae would dynamically provide the values in the highlighted F4:G6 range without script editor? 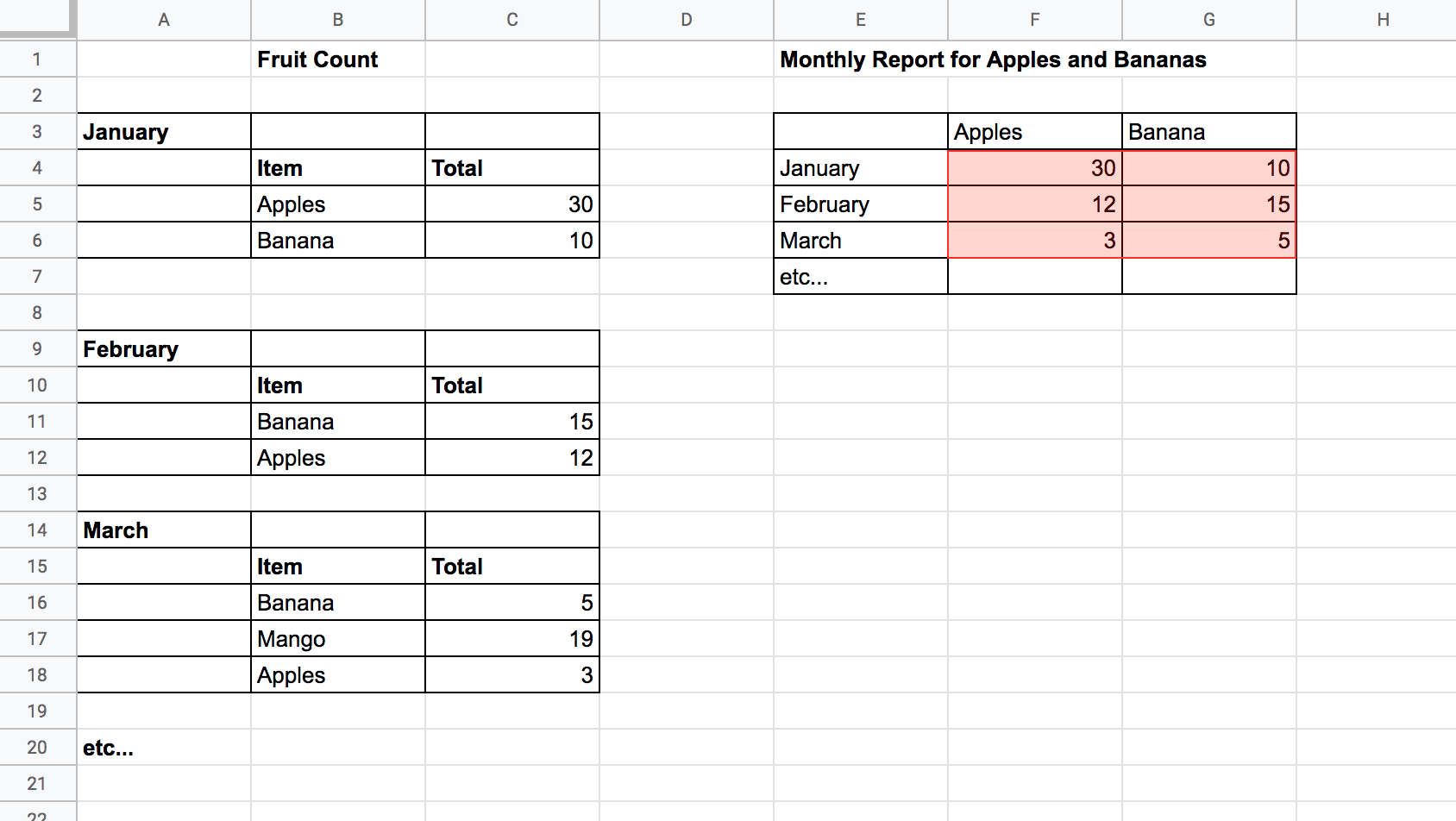 Here is the live spreadsheet for copy.

1.) First, you'll want to have "January 2020" instead of just "January," etc. If you only have the words, a pivot will try to order them alphabetically, since they are just words. This would leave "February" before "January," etc., which isn't what you want. In addition, once January 2021 starts, QUERYs would start to blend both sole "January" words together, etc., which, again, isn't what you want. So start by adding "2020" to all your month names in your raw data chart. That will be enough to convert them to dates, which can be ordered accurately, now and into the future.

2.) Place the following array formula anywhere in the sheet:

The formula will adapt itself as new raw data is added in Columns A and following.

If you're going to place it in a separate sheet, be sure to edit all range references in the formula to include the raw-data sheet name (e.g., Sheet1!B3:B, etc.).

3.) Most likely, the chart that is formed will show the dates along the left side in their raw form: as numbers in the 40000 range. Just format that range (or entire column) to show the dates as you like. (You can custom format them to be just the month name, in fact, but I'd still recommend something like "MMM yyyy."

4.) If you like you can further style the chart cells (e.g., bold the top and left-side labels, etc.

5.) This shows all fruits. If you truly only wanted "Apple" and "Banana," there are many ways to go about it. But probably the easiest to understand is to just wrap everything in yet another QUERY like this:

So maybe not that short. Hope it gets you where you're trying to go.

3
Transpose only one column in Google Spreadsheets

4
Multiple Conditions on a CountIF?
0
Counting unique values based on multiple columns
1
How to merge 2 tables into one?
2
Formula to use in Google sheets to count all cells containing specific texts
0
Trying to copy a cell formula with a dynamic range
0
Is it possible to import a formula from another spreadsheet?
1
Conditional formatting cells close to minimum of the column
1
Compile cells when cell contains certain value
2
Filtering multiple ranges into a single list
0
Return unique values across multiple sheets