I have a google form where team coaches input which players played on a given day.

They also input if they were Man of the Match, Yellow/Red Cards Received, and how many Goals they scored. 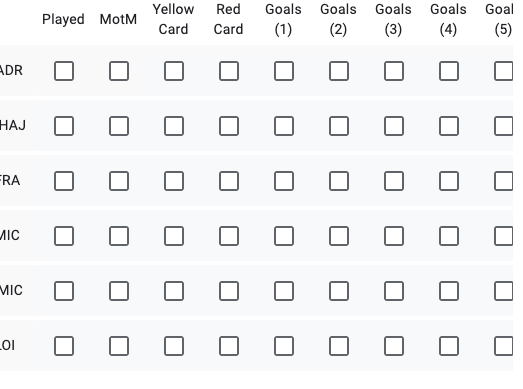 When the form is submitted there are blank Columns where players did not play. There are 11 age groups and 4 teams within each age group, roughly 400 players, therefore 400 columns!

This is team WHITES.

In Columns to the right (after the last player of the last team) i need to register only the players that played and omit the non playing players.

I have the following code but it's not extracting the correct data.

As it is automating a Google Form the first three lines of the formula can be ignored. Its from QUERY( which is the problem.

The formula in JN1 is then copied right for 16 Players

Is Query/Transpose the correct way extract this data or something else?

11
Average of last 7 non-empty non-blank cells in Google Sheets
6
Stacking multiple query formulas throws “an Array Literal was missing values for one or more rows”
0
Using array formula in Google Sheet
1
Outputing Array Formula in one row
1
Skip arrayformula if the result of that formula is blank
3
Importing a row from one Google Sheet to another
0
Import Form data into a sheet
1
Find and place in a column, the first non-blank cell in each row from a range of columns
1
Array formula with index match to return array of matches
1
Array formula with concantenate not working