You have two Google Forms. They are identical except that they are in different languages. You want a summary of the combined responses.

Use QUERY to create an array that combines the results of two separate queries - one for each Form Response sheet.

The key aspects are:

The query is in Cell A3 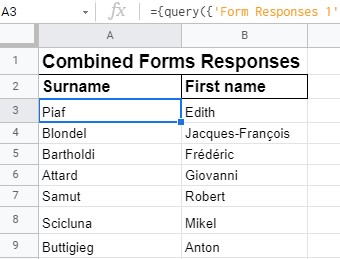 2
How do you automatically align incoming form responses in Google Sheets?
0
Responses missing in Google Forms under the 'Checkbox - Other' question
2
Simplifying Google Form Checkbox Responses into Itemized List
2
How do Google Forms handle the "Other" field in Multiple choice/Checkboxes/Drop-down questions?
2
Lock two Google Sheet cells to each other
1
Edited Google Form while users were responding - how to recover initial responses?
1
Compare dates from two years in a graph when dates not identical in Google Sheets
1
Combing two ranges with identical column structure from two different sheets (in same spreadsheet)
1
Possible to sum a Cell in two different Google workbooks?
2
copy a google form retaining responses and summary charts