How can I transform a form created in Google Sheets into an App or something that can be used by multiple people that also autoupdates?

So, I've created a form of sorts in Google Sheets. No, I don't mean a Google Form linked to a spreadsheet, I mean a literal form created directly in a Spreadsheet. Picture for reference: 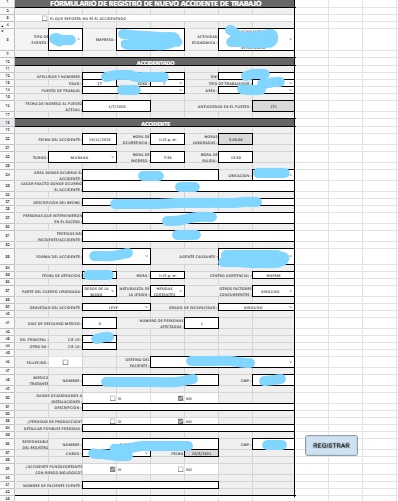 I've already coded it so the input values get stored in all the tables needed, and the needed documents and other files get created when you push the "REGISTER" button, so it's already working as intended.

The problem is it can only be used by one person at a time. In the past, when I had this situation come up, I would just make enough duplicates of the spreadsheet and set it to be only usable by a specific user each, meaning I'd need as many duplicates as there were users. This ended up a nightmare when any of them found a problem with the code, as I ended up having to fix every single one of the duplicates manually.

So I want to know if there is any way to make this into an App AS IS or something that can be used by multiple users without having to create duplicates of the file, so that if any of them finds some trouble, I can just fix the original and have all users get the fix.

I know that there must be some other way to do this if I were to work this from scratch as an app, but unfortunately I literally had no idea how to code until a few months ago, when out of desperation I looked for ways to automatize entries into our databases, so it's completely out of my reach to do anything more advanced. So bear in mind that all I know about code, is what you can do with Apps Script in a Spreadsheet. And using AppSheets directly on the table won't work because this form feeds at least 4 different tables and creates other form-like spreadsheets using the input data.

It would probably make sense to re-implement the form as a web app that saves each entry as a row in a spreadsheet.

You may want to take a look at this example:

You can File > Make a copy of the spreadsheet to try it out yourself. All the code is in Tools > Script editor. The web app user interface is done with fairly simple HTML with a bit of JavaScript. Your would need to learn HTML to recreate your current user interface.

4
How to report which checkboxes were left unchecked on a Google Forms submission?
8
How can I get Google Sheets to treat my form-submitted strings as plain text and preserve leading zeros?
1
How do I put the timestamp in the “check in” or “check out” column based on the user's response in the Google form?
3
How to merge multiple spreadsheet content having the list of keys to them?
2
How can I round a Google Form input to nearest .5?
2
Using manually entered columns along with data input through Google Forms
0
How to split data across multiple rows when submitting from Google Form
1
Linking multiple script created forms to 1 sheet in pre-existing spreadsheet
0
Creating a Dashboard in Google Sheets which multiple people use issue with multiple users