A friend posted an image that was animating directly in the messages feed on my Facebook start page. How is this possible? How can this be done?

Is it a GIF image just renamed to .jpg? Probably not.

I don't know if it helps or anything, but here is the portion (script) that contains that image URL:

The important part of the above seems to be here:

The first thing to keep in mind is that the feature works with GIF links, not GIF uploads. At least for now, attempting to upload your favorite GIF will not result in a usable, playable GIF on Facebook.

Services such as Giphy, Imgur, GFYcat and others are trying to make it easier to embed large GIFs all over the web

make sure you're using the full GIF url from Giphy or other GIF services.

The only thing really needed is the animationurl, which needs to be a Facebook hosted image.

These are the ways that were previously possible

The first working way seems to be somehow sharing the currently available set of gifs on Facebook servers via tagging users in it. I have not seen any new GIFs appear apart from those that currently circle around.

The second utilizes an abuse of the Facebook API via a Facebook Application. The developer hid the GIFs in a video embed preview.

Now, assuming one were to figure it out, you would be banned... because this means the image upload system is flawed and dangerous code can be executed by being concealed in a GIF or picture. It seems that Facebook Photo Team will ensure that GIFs do not stay around anymore.

Facebook Platform handles img tags in a special manner. When publishing a page, Facebook servers request any image URLs and then serves these images, rewriting the src attribute of all img tags using a *.facebook.com domain. This protects the privacy of Facebook's users and allows them to better control the quality of service of their images.

There are several reasons for the existence of the image cache:

And in the end as I have mentioned elsewhere

Also although not stated anywhere in the TOS,

So you may get a pat on the back for testing on a Test User Account but using an exploit (if found) on a personal account. I am certain you will end up seeing a termination of your account.

P.S. Don't think because that when you are browsing sites that Facebook Employees do not see this information. The moment an exploit is known publicly, in the same amount of time it will be shut down

Although the extension is jpeg, it's still a gif file 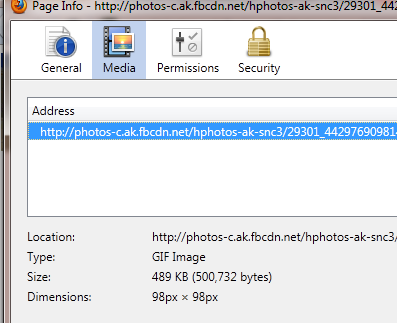 To answer your question, this is what I found:

What you have to do is upload a small animated gif (about 50 KB or less)as your profile photo (Facebook will flatten animated gifs which are to large, but do not detect the smaller ones). It will then be in your profile's album. Your icon itself will NOT be animated. However, you will see it as animated in your Facebook profile photos folder, and by going to that photo, & clicking on "share", it will appear on your wall as animated.

Profile Thumbnails are always generated from the base image. If the base image is under 120x120 then the animation will remain intact through both the minimized and maximized views. Anything over that size will need to be resized to fit as a minimized gallery thumbnail, and will lose animation, however the full-size should remain animated.

I researched and found that the image is generated by the application http://apps.facebook.com/animated-picture/ You can generate files like this from a SWF (flash) on this application as animated GIF and publish on your facebook!

As its a video file, and Facebook autoplays video files in the Newsfeed (if you don't have that Facebook setting turned off) so it should behave just like an animated gif (constant looping) as facebook automatically loops videos that are under 30 seconds long.

Not the answer you're looking for? Browse other questions tagged facebook animations or ask your own question.