How to make Row() formula dynamic based on a cell content?

I am creating a multiple choice (see column A) and I want it to be randomized (see column C). I saw a formula in the internet, modified it, and it really does randomized the contents of each cell in column A. But one problem is that, the number of multiple choice options vary. For example, in row 2 I only have 3 options; in row 3 I have 4 options; in row 4 I have 5 options. The problem is, in order for the formula to work, the range (see the highlighted yellow part of the formula) must also coincide the number of options. I have tried my best but I'm really stuck on this. I can't find a way to make it dynamic based on the number of multiple choice options. Can you help me with this? Thank you so much! Here's the link to my Google Sheet https://docs.google.com/spreadsheets/d/1RnN7CUiuFt6m2q6ii3B6pEG9kHx2ofYvbNqWj3TZV9c/edit?usp=sharing

This answer is an adaptation of an answer by @Calculuswhiz to Shuffle comma-separated list of values in one cell (Google Sheets) on StackOverflow.

Use this formula, and copy down as many rows as necessary. Alternatively, adapt the single arrayformula in the StackOverflow answer.

The initial values in Column A are separated by a line feed (char(10)). To convert this to a comma separated list involves the following steps: 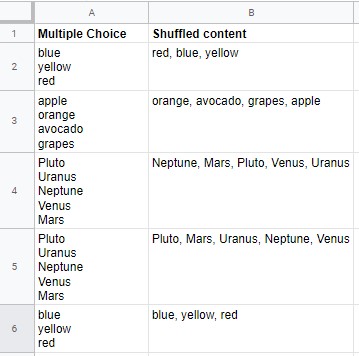 Not the answer you're looking for? Browse other questions tagged google-sheets formulas google-sheets-arrayformula or ask your own question.

2
Google Sheets formula every x rows, assign incrementing cell value
0
Create a row based on the sum of every column in a sheet
0
Assigning rank in another sheet based on Average
1
How can I change the formula of one cell based on the value in a different cell?
0
How to apply a conditional formatting rule on the last row of similar cell value across one column?
0
attempting to compile an output List, into a single cell in one Sheet, based on matching criteria in a range on another Sheet
0
How to find and get data from only a certain, dynamic set of columns in another Sheet?
0
How to make variables dynamic in ARRAYFORMULA/QUERY Combination
0
How to use a dynamic value from a cell as row number for a cell reference?