I need to use use a "VLOOKUP" type formula to match values across two data sets, but instead of using 1 key value as you would normally with VLOOKUP in need to use 2 key values.

Please see below screenshot of example data. What I need to do is match the "TAX" value from the "Merchant Report" to the "Purchase Report" where "DATE" and "ORDER VALUE" match across the two data tables.

I use the term "VLOOKUP" in inverted commas, as i dont think this can be done with VLOOKUP (without a helper column), so instead was trying to use the following QUERY formula (learnt from this video) :

Ive made an example of the spreadsheet here in google sheets (please use file > make a copy if you would like to make a copy) - https://docs.google.com/spreadsheets/d/1VuVuSIiuLQLVrf5dhTwKV368pvrs-PyT4cnx7wLRdyE/edit#gid=0

A) Any idea why this isn't working ?

B) Any idea how i would deal with the lines colour flashed in yellow, where both the key values are the same, but the data to be matched differs ?

See my comment directly below your post. Assuming that entry is not a possibility in your real data set (i.e., that two or more line items would have the same date and order value yet a different tax amount), delete everything from Col C (including the header) and place the following formula in C1:

This will generate the header and all results. You can change the header text within the formula itself.

VLOOKUP, as you can see here, is capable of using concatenated range data to find matches.

Apparently, part of the original goal was to know why the original QUERY formula used by the OP wasn't working. (This was not clear, given the opening statement: 'I need to use use a "VLOOKUP" type formula to match values across two data sets, but instead of using 1 key value as you would normally with VLOOKUP in need to use 2 key values.')

The OP's original QUERY formula that does not work:

The version of the above that will work:

The original formula doesn't work for a number of reasons:

1.) There are far too many quotes, used incorrectly, for the formula to have worked, even if the data to be matched were all strings.

2.) Quotation marks of any type are used to search strings. Typically, those are single quotes when used within the Select clause, which itself is already enclosed in strings.

3.) However, neither piece of data being compared is a string. One is a currency amount and the other is a date. Both are numbers, and each is treated differently. But neither would be enclosed directly within quotes in a QUERY.

4.) Numbers such as currency are simply searched, without being enclosed in quotes. So the dollar amount concatenation looks like this: "select G where F = "&B3...

5.) Dates within QUERY formulas must be set up a specific way; that is, they must be converted to text in a specific format that matches how SQL sees them. So the data-match concatenation looks like this: "select G where ... E = date '2021-11-23' " Notice the use of date and the single quotes within the Select clause that come before and after the date-string that will be formed by the TEXT function (which must be in the format yyyy-mm-dd only). Since your dates are variables, they must be interposed like this: "select G where ... E = date '"&TEXT(A3,"yyyy-mm-dd")&"'"

All of that said, using QUERY this way for the purposes in the original post would have required a separate QUERY formula per row. And then there is the added complication that a single date-amount combination may have more than one tax amount assigned to it, meaning that the QUERY for the first of those would return two rows of information, not one. That means that even if there were a separate QUERY dragged down into each cell of a column, this would result in an error at each point where the return would be more than one cell/row, because room would not have been left below each such QUERY for its expanded results.

All said, QUERY is the wrong function here. On the other hand, as I provided above, VLOOKUP is a concise, single-cell formula that can produce the results simply and without such conflicts. 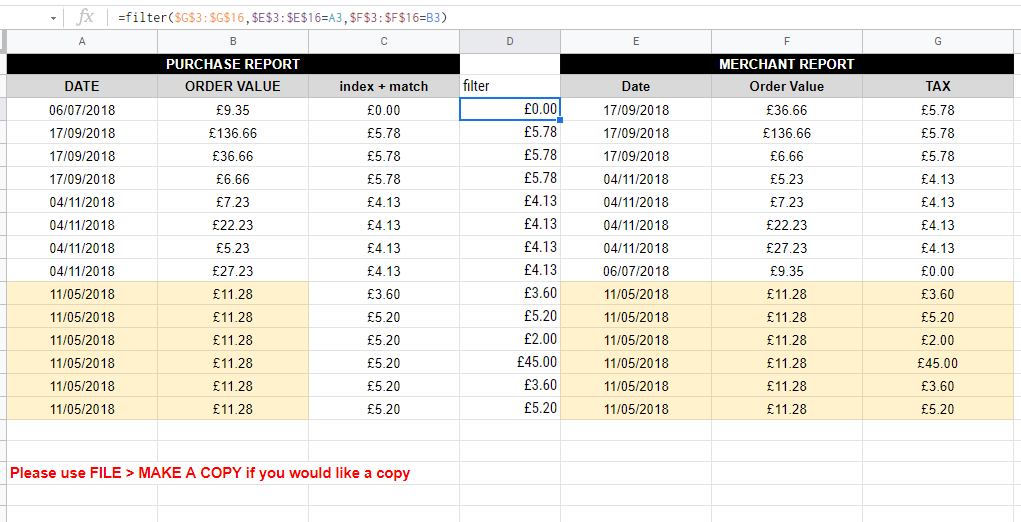 Got two different approaches, one is incomplete, the other one requires new office version.

Paste this in C3 and spread the formula to the rest of the column:

As for your second question, you would need to identify each line by using some form of ID, worst case scenario you can add an if statement which would make the formula three dimensional, checking the values in your first table and then checking all the previously checked values in your output table.

For both formulas you can add as many extra conditions as you want.

Not the answer you're looking for? Browse other questions tagged google-sheets google-sheets-query or ask your own question.

14
Google Sheets Query Get Row When Any of These Cells are Not Empty
0
Google Sheets Query cannot find some numbers
1
Query returning results into merged cells in Google Sheets
1
How to populate a cell based on specific name and specific date using a query function?
0
How to run a google sheets query against a dynamic range
0
Google Sheets: one query for Sum and Filter?
0
In Google Sheets, take the first and last value of a query to sumarice, grouped by user and shorted by date
0
Vlookup with column search by headers