Trying to create a cooldown check for a promotion log

For reference E16 is a person's ID so it searches for their ID which is what's used to fill in a person's promotion.

The code I have that checks this is: =IFERROR(IF(VLOOKUP(D14,{Roster!$E:$E,Roster!$D:$D},2,FALSE) =H14,INDEX(Roster!M:M,MATCH(TRUE,ISNUMBER(SEARCH(D14,Roster!E:E)),0) ),0)) D14 is the person's ID on the 'Promo/Demo Log' so it searches the roster for that same ID. Column E on the 'Roster' sheet is where the person's ID would be on the roster and column D on the 'Roster' sheet is their rank which checks against H14 on 'Promo/Demo Log' and if the rank is equal then it displays the date. This works but isn't fully needed, I only added the check rank bit to try to fix the issue I was having.

So, I am currently making this for an online game I'm playing, and for some context the roster is used for a regiment within the game to list the members in that regiment. The different sheets on it are as follows:

Roster: - Main sheet that displays everyone currently in the regiment Tryout Log: - The page where people will fill in who they did a tryout for as well as their own information. Member Data: - When someone joins the regiment, their information is put on this sheet and they are assigned a unique number. Promo/Demo Log: - The log where peoples promotions and demotions are filled out and by who.

On the 'Roster' sheet the main bit of code that is referenced is in Column K, titled 'Last Promotion' and column M, titled 'Cooldown Expired'.

I will attempt to describe my issue as best as I can.

After someone has been given that Unique ID on the Member Data sheet, on the 'Roster' sheet you then fill in the ID box with the person's assigned unique number, that then auto generates the rest of their information. One of those cells is the 'Last Promotion' cell (in Column K) which searches for the person's ID in the 'Promo/Demo Log', if it can't find it in there (because the person is a Private and just joined the regiment through a tryout so hasn't been promoted yet) it then searches the 'Tryout Log' sheet and returns the very last date that matches up to that person's ID, so you can see when they most recently joined the regiment or were promoted.

The next column over from that is the 'Cooldown Expired' column (Column M). This just calculates if they are off cooldown using: =IF(AND(K16<=TODAY()-1,A16=1), TRUE, FALSE) --K16 is the cell in which the date the person was last promoted is in.

Now, my main issue relies on the 'Promo/Demo Log' page. I am attempting to make it so as someone fills out a promotion, when they put in the Date first and then the person who has been promoted's unique ID, if that person is STILL on cooldown it'll be highlighted so that people aren't accidentally promoted while still on cooldown. However, due to the nature of the people in the regiment moving up and down in ranks and their date of last promotion changing all the time, I have found this very difficult to do.

When I first thought I'd managed to do it, I found that when you enter in the date on the 'Promo/Demo Log' to log the persons promotion, as soon as you put the unique ID next to it, because column K on the 'Roster' sheet is actively looking for the persons ID and a date of promotion, the roster automatically updates itself to say that the person was promoted to whatever the date that was just filled in was. E.g if someone was last promoted on the 7th Feb 2022 and they have a 1 day cooldown, if on the 9th Feb 2022 the person was then promoted and whoever was filling in the promotion started filling in the log, as soon as they put in 09/02/2022 and the person's ID, the roster will instantly change to 09/02/2022 from 07/02/2022. This usually would be good but because I wanted a check to be carried out on the 'Promo/Demo Log' to check if the person really was off cooldown, this breaks that as they instantly are not off cooldown because the date has just changed to the day they were promoted, which ruins the whole point of the check as it will always say the person being promoted is still on cooldown.

All code I've used and attempted to solve this problem with are on the sheet, I've tried to annotate it as best as I could to help anyone understand the issue I'm having.

I apologise for such a long description, especially as I know it's going to be very confusing. I've spent days trying to solve this, so hopefully this will be challenging for someone else and you won't take 5 minutes to solve it...

Any help is appreciated, thanks :) If anyone here does use Discord and would like to get in contact with me via that, my Discord is louis#8564

Below is a link to the Google Sheet: https://docs.google.com/spreadsheets/d/1q0dL1eQE9HL0kQTTTjPcicooqtvCBc-5mWb1PWtYz2s/edit?usp=sharing

My own view is that the "Roster" sheet should display the current Cooldown date, but that the "Promo/Demo Logs" should contain all the elements required to establish whether a player is entitled to be promoted and to which grade.

This answer creates a "Status display" (for the want of a better term) for any proposed user promotion. The display will indicate whether the promotion can proceed or not. The images below show a selection of the "user name", but this can be easily changed to select the User ID.

Though the answer doesn't include this, by adding a checkbox and an onEdit(e) script, a valid promotion could be easily/simply updated to the "Promo/Demo Logs" sheet. 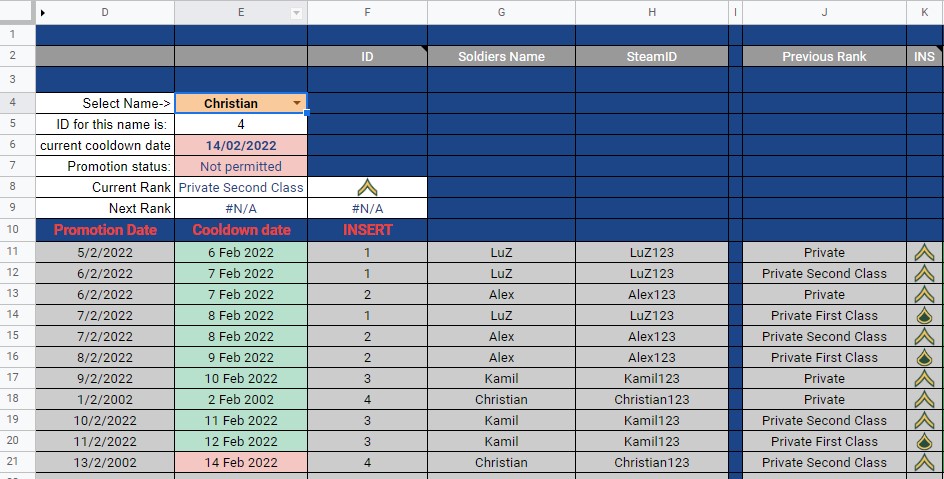 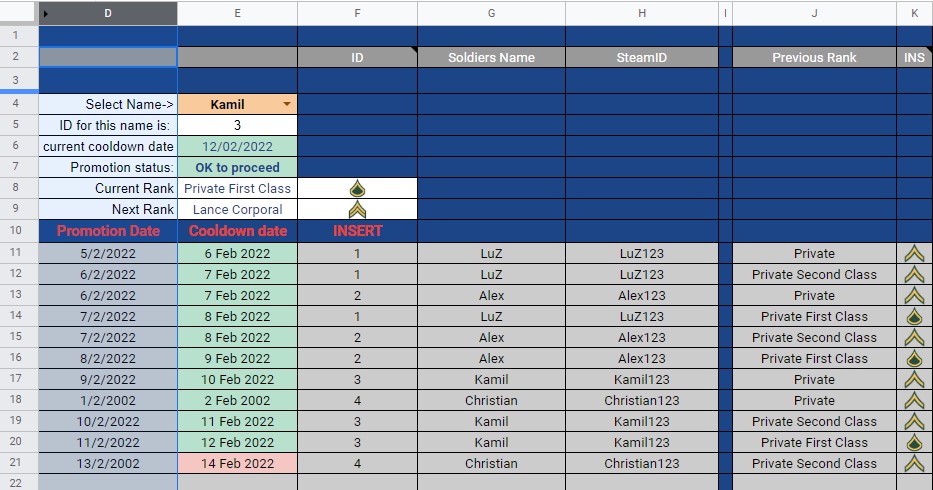 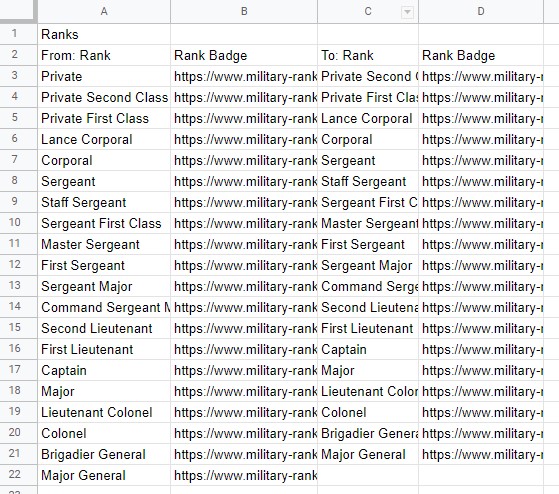 Not the answer you're looking for? Browse other questions tagged google-sheets google-sheets-dates or ask your own question.

1
How to find last non-blank entry given a case-insensitive unique identifier?
1
Returning max value based on two conditions
2
How to make a cell autopopulate the date dependent on another cell
1
Autofill Google sheets template based on new entries in column A of "master" sheet
0
How do I use a drop down of sheet names to change the data pulled using the FILTER function?
0
Google sheets sum cells if corresponding date is in range of a month
0
Lookup between two dates in Google Sheets
0
Help with SumIfs - Trying to create a sickness tracker that can track how many days of company sick pay someone has left, in a rolling year