As you know, there's a pageless mode in Google Docs that allows you to remove the borders of a document. 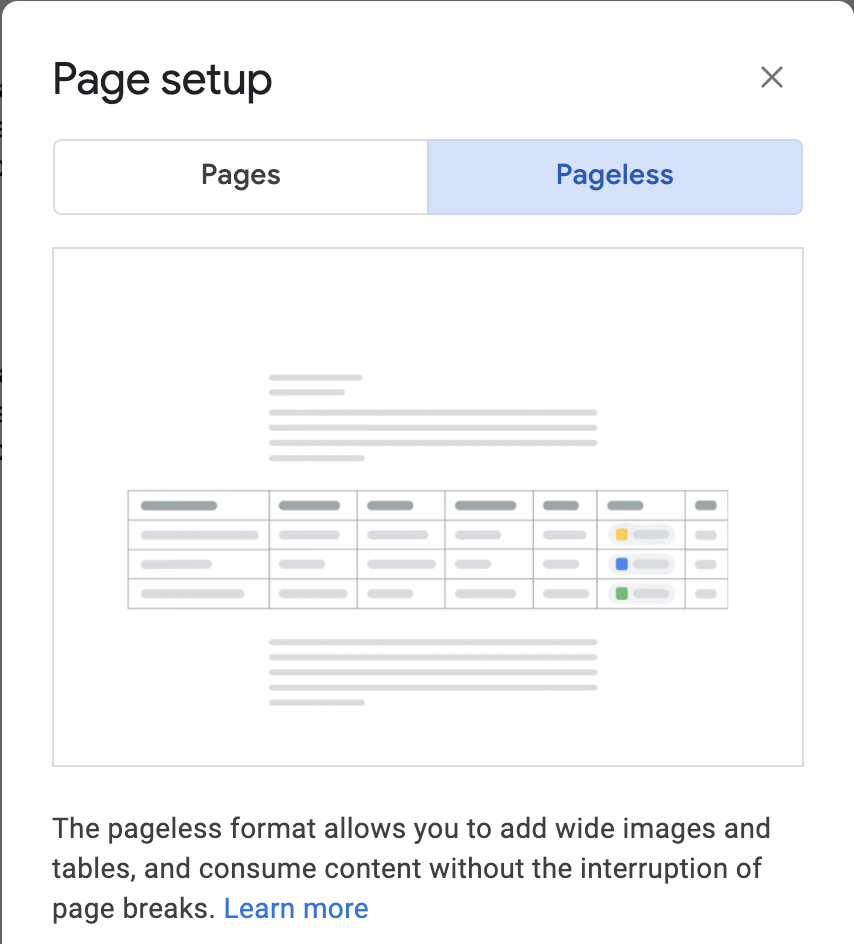 I know I can pass parameters in the url like ?rm=minimal. That way, I can hide the menus. And that's great. Though those parameters are not officially documented there are a few references like in here: All Google Docs URL parameters/functions/commands?

But do you know if pageless is available as a url param? I tried things like ?pageless, ?pageless=true, ?page=pageless, ?setup=pageless with no luck.

So, any clue on how to enable pageless without opening the menu manually? I want to automate this.

google-docs querystring
Share
Improve this question
edited May 12 at 5:12

Since turning on the pageless mode doesn't add a querystring / parameter it's very likely that there isn't a parameter to control this feature. I think that the query string aren't used for controlling new features with very few exceptions like the Google Sheets filter views and those that still works nowadays are kept to not annoy people that use them.

The Google Apps Script Release Notes doesn't mention this feature so it's very likely that it's not officially supported yet.

Another thing that you might do is to post a feature request on the Google Apps Script Issue Tracker. For details see https://developers.google.com/apps-script/support.

One more thing that you might do is to learn how to analyse the Google Docs network activity i.e. by using Google Chrome Developers Tools. For details see https://developer.chrome.com/docs/devtools/network/

Not the answer you're looking for? Browse other questions tagged google-docs querystring or ask your own question.

7
Change the page color of a Google doc?
3
Border around Google Doc (word processing)
4
Tracking the origination of a Google Doc
8
What are the different parameters used in Google search?
11
All Google Docs URL parameters/functions/commands?
1
Completely remove pages from Google Doc?
0
Does Google document the parameters of Google Search publicly?