In Google Sheets, how do I output data and it's sum in one sheet, taken from only certain filtered/duplicate/conditional data from a different sheet?

What is the formula that I need to enter in 'Sheet2' to Output this table from the data in 'Sheet1'?

I have (dummy) data of People in a Google Sheet tab ('Sheet1') that looks like this (Name, Email and a numerical value of either blank, or '1'):

I want to create another table, in another tab ('Sheet2') that outputs JUST those People who have any non-blank Value against their name, along with the SUM of those values:

Steve always had blank Values in column D, so he doesn't appear in the Output data table (the second table).

In John's case, he appeared in the Output table with the sum of '3' in the Value column.

What is the formula that I need to enter in 'Sheet2' to Output this table from the data in 'Sheet1'?

Any help would be great!

I solved it with a query:

You can do this directly with a Pivot Table: 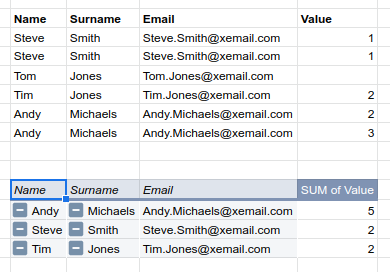 I've shown my solution here on the same sheet, but you can refer to the source data table from another sheet.

0
Google Sheets COUNTIFS if cell contains part of text, exclude blanks
2
Google Sheets - Problem with ARRAYFORMULA and COUNTIFS Combined
0
How to insert numerical values in a cell of a Google Sheet and how I can find their sum?
0
How to set cell value based on 2 conditions of 2 other cells?
0
How to use arrayformula to find and get data from only a certain, dynamic set of columns?
1
Sliding window average of last N non-empty non-blank cells in Google Sheets
1
Return the closest value from two-dimensional data
0
How to include VLOOKUP with a loop for a list of data on Google Scripts?
0
Copy value from another column based on cell value
0
How to find duplicate entries based on 3 different columns in Google Sheets