Google Sheets - efficiently aggregating one column for grouping, based on minimum value in another column?

I have a sheet with upward of 1000 rows with the following schema: 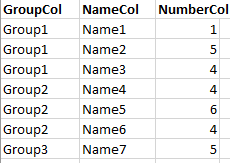 In the dataset, any given value in GroupCol is repeated 1-10 times.

I need another sheet that has one row for every unique value of GroupCol, along with these aggregated metrics for that group:

Ideally, it should also do the following, but they're not as important:

This works in Excel, which allows you to add a Value Filter of Top X from an arbitrary other column. I added NumberCol to Values. For Rows I added GroupCol first and NameCol second. And then I added a Value Filter to NameCol, that takes only the Top 1 of NumberCol. After tweaking some settings I was able to get the aggregates to show as a flat table instead of a master-details grid.

But Google Sheets doesn't have the Top X feature for pivot tables as far as I can tell, so that doesn't work.

2. UNIQUE function to grab all groups for one column, and FILTER-based lookup aggregations in every other cell of the aggregation sheet.

This works, but it's slow. When editing NumberCol values in the original data, the whole application freezes up for ~3 seconds as it recalculates all the aggregate data. Additionally, if I adjust any of the aggregate formulas, I have to drag those changes into all 400+ aggregated rows, which is time consuming.

Cell A2, to fill col A with unique groups:

3. ARRAYFORMULA to do the same as (2) but without having separate formulas in every cell.

I can't get this to work, I think because the each cell's formula is already array-based from the FILTER function. I've also tried other lookup functions instead of FILTER but they all seem to block ARRAYFORMULA. ARRAYFORMULA just can't work as an aggregator I guess?

The query API seems to be missing the functionalities I would need. Group By only has limited Aggregation methods, it doesn't allow using the minimum of one column to aggregate a different column. Joins are just nonexistent.

Any suggestions? Am I just going to have to stick with my slow and clunky solution from (2)? 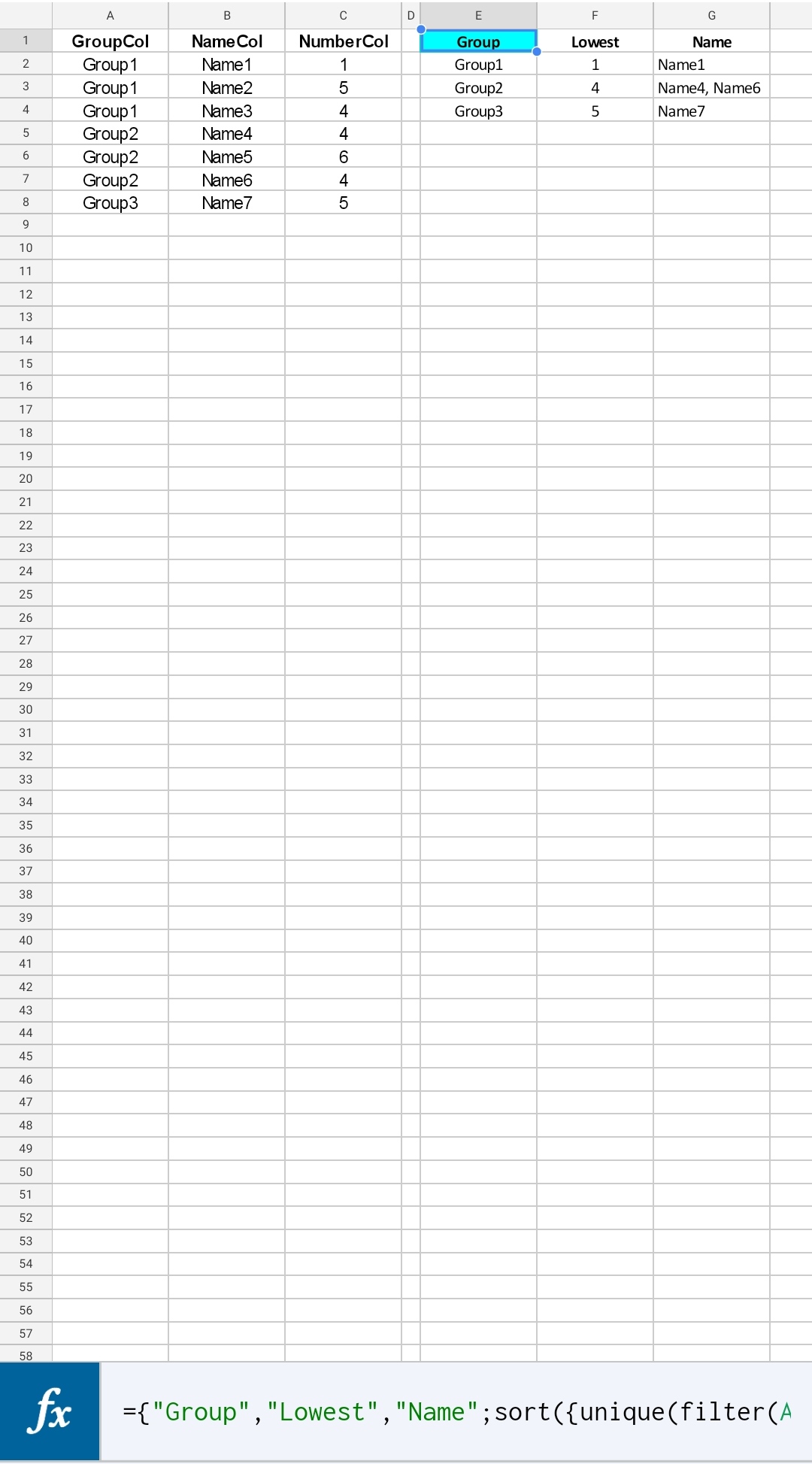 Not the answer you're looking for? Browse other questions tagged formulas google-sheets or ask your own question.

2
Google Sheets formula every x rows, assign incrementing cell value
1
How can I import rows from one mastersheet to another sheet where row has value "test"?
0
Google Sheets populate X cells with formulas based on single cell containing value X?
1
Copy the contents of a row to another sheet based on a specific value
0
Sum of LAST Column in Google Sheets
3
How to Apply Conditional Formatting Based on Adjacent Cell Value for Entire Column?
0
Dynamically form a cell value in Google Sheets
0
In Google Sheets, can you repeatedly autofill until next non-blank cell or until a value in another column changes, whichever comes sooner?
0
How to pull data from one sheet to another based on duplicate values in a specific column. Google Sheets