How can I mute a Google+ circle?

I've seen that the main stream is composed of all the singular streams from the various circles. I can mute a single post or contact, but not a circle (all the posts coming from people belonging to that circle) nor compose the main stream in order to specify what circles to draw posts from.

Thanks for the suggestion on blocking them, but I really don't want these people to be blocked. Let me clarify. I have all my friends and family and colleagues in circles, and they all show in the main stream page (that is, the Google+ "homepage").

I've noticed that many illustrators, comic creators, and public persons I generally follow (on Twitter, and their blogs) have a Google+ page. Due to the nature of Google+, they're using those pages like blogs, to post pictures, and to read news and comics.

In my "virtual world", though, they're second level citizens. I'd just like to follow them once in a while, in my spare time, like "let's see if there is some good new comics", but on a day-by-day use, I don't want my family and friends' posts to be sunk in thousands of less-important-to-me posts!

This has been fixed recently. Go to your Circles, right click on the circle you want to throttle or mute, and select "Show stream from this circle". At the top of the stream you will notice a slider that lets you adjust how much you want to see from that stream, including all and nothing.

There is a Google Chrome extension called Plus Minus which allows you to selected the circles that you see in your stream. 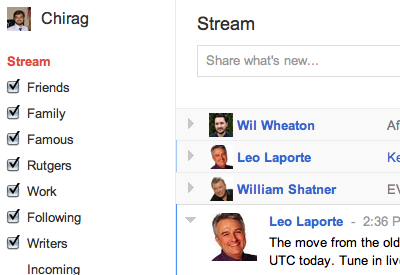 Given that Google+ is still in beta, why don't you make a suggestion here that you'd like to control how often you get updates from your circles.

You get to this from the Options Icon > Send Feedback.

What I did was make a circle called "Stream" - then I added everyone to this circle that I wanted to see posts from. To make it even easier, I then made my bookmark point to Google+ with my "Stream" circle filter on.

I suppose this is not the ideal way but it's pretty easy - hope it helps.

Create a blocked circle to ignore streams from certain people.

Say one of these people you want to mute is Pepper.

To block someone while in the circle editor:

They are now in a blocked circle. You'll see this as a red circle labelled "Blocked" with a line-through on the Circles page.

Continue adding other people to this circle so that you don't have to read any of their streams.

Not the answer you're looking for? Browse other questions tagged google-plus mute or ask your own question.

10
Can I make a public circle in Google+?
2
Can you see your circles' +1s in your Google+ Stream?
4
Gmail “Mute” not working
2
Who sees my posts shared with “Extended Circles” in their stream?
3
Why don't I see posts from my family members in my stream?
2
Do Google+'s machine learning algorithms use mute post information?
4
Can I mute a friend on Foursquare?
1
Google+ Accidental Add to Circle
7
Can I mute or disable autoplay for Twitch's featured streams?