What is the maximum number of characters allowed in Facebook status box?

People often update their status on Facebook, but what is the maximum number of characters allowed in Facebook status box?

I have just tested it and the latest iteration (late August 2011) allows for Status updates of up to 500 characters. 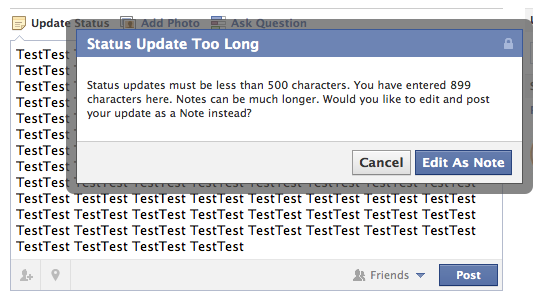 In September, we increased the character limit on status updates to 5,000 characters. Today, we're announcing that you can now write posts with more than 60,000 characters.

Status updates must be less than 5.000 characters. You have entered 5.066 characters here. Notes can be much longer. Would you like to edit and post your update as a Note instead?