How did this guy hack Twitter's 140-character limit?

Today I was surprised to see that a guy has hacked Twitter's 140-character limit. The message consists of 930 characters. How could this be possible?

The direct link to this tweet is here. For convenience, I'm copying the screenshot of full tweet below: 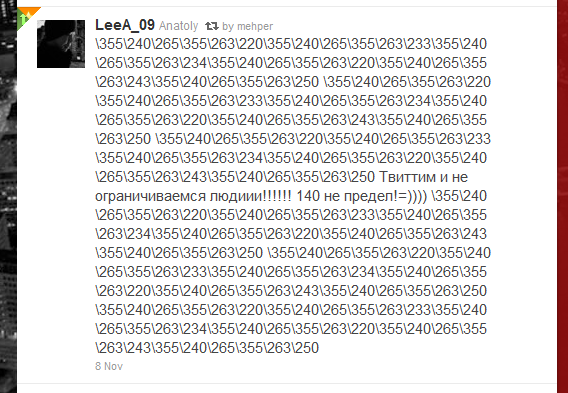 If the C-style octal escaping is decoded and then the result is interpreted as CESU-8, it comes out to:

Here it is as an image, for those without a full set of Unicode fonts installed:

Each group of characters beginning with a backslash and followed by three numbers is an "Escape Sequence". Each of them represents a single character. These are usually used for characters that don't exist on your keyboard such as non-English-language characters and symbols.

My guess is that when counting the characters, Twitter is counting each of these groups as a single character but when displaying them to the browser it is printing them as four.

Some of the escape sequences available are "control characters". These tell the computer to do something such as playing an alert sound or moving the cursor left or right or up or down or deleting the character to the left of the cursor. Although none of them are the last one I mentioned (deleting the previous character), he might have used that character to confuse Twitter as well.

Interestingly, when turned back into normal characters, it is quite repetative and looks something like this:

The explanation he gave was "Пишите в DM, всегда на связи )" which Google Translate tells me is "Write to the DM, always on connection)". I'm not sure exactly what that means or how it helps.

2
Getting the 140 Twitter character limit to reset itself after url shorten
9
What's the Twitter error "Your account may not be allowed to perform this action. Please refresh the page and try again."
8
How to enable Twitter's new UI?
12
Why does Twitter have a 140 character limit?
3
Links posted to Facebook page with Twitter not previewing correctly
4
Cannot follow anyone on Twitter (limit not achieved)
2
How to get definitions of Twitter's hashtags
17
How do I disable the "interesting tweet" notification type on Twitter?
0
From where did Twitter get this very er /graphic/ graphic for my tweet?
0
How to manually open twitter's "more tweets" page?