How do I log into or use Gmail without having to go through the HTTPS or SSL version?

Since the 443 ports for HTTPS is filtered in Iran, is there any alternative method of logging into Gmail which does not require the use of this port?

When all does get filtered or is otherwise unavailable, then maybe your only hopes are someone outside the country who can run a HTTP-to-HTTPS gateway, using for example DeleGate. Again, the censoring government (and whoever is running that DeleGate server) can then monitor all your traffic. (Google might be smart enough to hash your password, even when Google thinks you're using HTTPS. Still, even if the password is secure, then all other text can still be read, and cookies can probably be stolen.)

NOTE: the following does not work (yet?). I can show the Gmail login page, but after logging in, the many redirects (from gmail.com to www.google.com/accounts, to mail.google.com) confuse DeleGate. Maybe some smart MOUNT or some entries in hosts are required after all. Maybe it can put someone on the right track tough (if no easier solutions are found, like: ensure that does not work!).

See Force web address to go through https for a full explanation on mapping http://twitter.com to https://twitter.com. For a generic HTTP to HTTPS gateway, the command would not include the Twitter-specific MOUNT parameter, so:

No need for adjustments in hosts either; instead you can then use URLs like:

(Hmmm, if no easier solutions are posted then I might see if I can set up something like the above.)

Tor is made for exactly this situation. It can absolutely support SSL connections (you should not login to anything over Tor without SSL - otherwise you are giving your authentication details to completely unknown people, for example..)

You can use Privoxy to send SSL connections via Tor, http://www.privoxy.org/user-manual/startup.html explains this:

Before launching Privoxy for the first time, you will want to configure your browser(s) to use Privoxy as a HTTP and HTTPS (SSL) proxy. The default is 127.0.0.1 (or localhost) for the proxy address, and port 8118 (earlier versions used port 8000). This is the one configuration step that must be done! 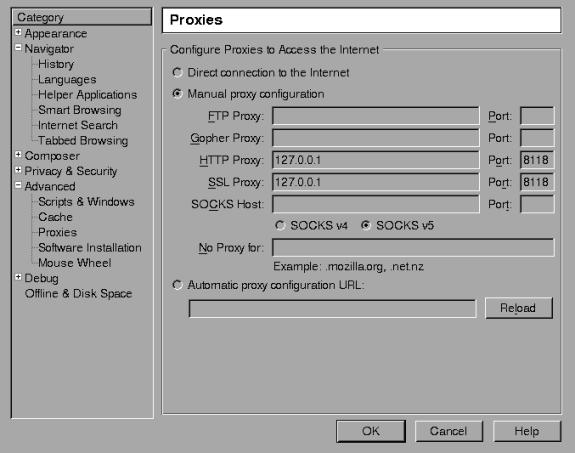 One possible alternative, can you use IMAP over SSL (port 995)?

Have you thought about an anonymizing proxy like Tor? This way, the filter would not work. Unless, of course, Tor is also blocked. But please only use encrypted protocols (e.g. like the mentioned HTTPS) over Tor.

Use Opera Mini, assuming it's not been blocked again. If you're on PC, you can try MicroEmulator to run Mini.

Have you tried using tor? If it's not blocked yet then you can login to Gmail using tor and change gmail settings. In that case, you should use GPG for encrypting your mails.

Alternatively, you can get a shell account (assuming port22 is not blocked), and tunnel over it port 443, so you can login to Gmail.

If the Iranian governments blocks SSL, they connecting without SSL results probably in some government server logging your password. If you connect without SSL you should be aware that they are probably reading your mail.

Not the answer you're looking for? Browse other questions tagged gmail ssl or ask your own question.

21
How to Manage Multiple Gmail Accounts on the Same PC/Browser?
1
How to best use an email log on a separate Google Apps email address
2
How can I log directly into Gmail when I am also signed into Google Apps?
1
"No offline messages" message after logging into Gmail on iPhone and iPad (using same account)
12
Is it possible to use a custom domain with Gmail, but without Google Apps?
0
"SSL search is off" notification on Google
2
Forwarding into Gmail became unreliable
4
Consume emails from G Suite into my personal Gmail