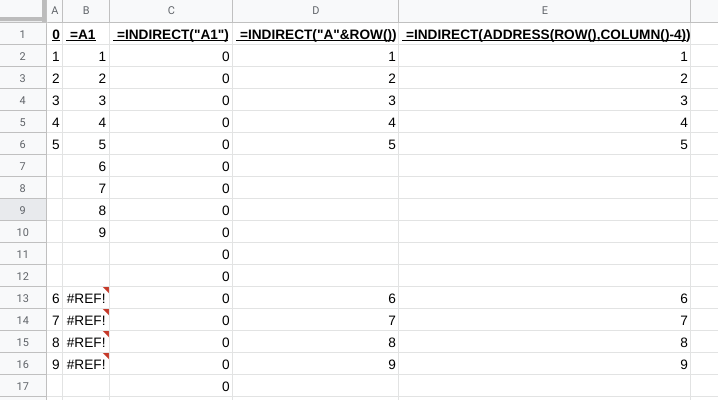 There are lots of solutions here already, but if your column-headers are stable you can use index() with row() and match(). Say the value you want will always be in a column with a [1st-row] heading of 'last month', then to find:

The best way I've been able to solve this problem is by creating a duplicate of the sheet on Google Sheets.

From the duplicate, I cut the cells and then paste them to the original sheet. I then delete the duplicated sheet.

Seems tacky, but saves me a lot of time.

Here is a bit of hack, as previously noted, Ctrl+X for cut and then paste preserves the references (equations changed to refer to original cells from new location), it's copy and paste that updates according to the rules changing which cells are referred to). Using $s à la $A$1 version works within a sheet, but not between sheets.

Result table copied and all the equations are modified to refer to the same original cells, even on different sheets.

This "bug" seems to be a standard feature in all spreadsheets applications, and I know of no option to disable it, (though there are a few workarounds).

It's most irritating when you have an accounting ledger with a column of subtotals. When you cut and copy and item/amount row, the subtotal formulas get mixed up. Even if you "protect" the formula cells, they still get changed when you do this! It's very counter intuitive.

The trick of selecting and mouse-dragging doesn't work for me in Libre Calc.

What I always do by habit, as a safeguard, is Ctrl+C to cut my item/amount rows, then immediately hit Delete to remove them. Now there is no longer any reference between the amount cell and adjacent formula cell, and I can past the row in another location with issue.

23
Is it possible to refer to a whole column in Google Spreadsheets using R1C1 format?
6
How can I sort data with named-ranges without breaking references to the ranges?
3
Don't disturb formulas on Google Sheets when cutting and pasting
2
Inserting text from a cell into an IMPORTRANGE formula
4
Script to insert new row and copy down formulas that auto increase according to row index?
1
How to prevent cut-and-paste data from changing collapsed grouped cells?
0
In Google Sheets, how can I copy a cell's reference, to paste ='sheet2'!E15 into a cell?