Who pays to drive traffic to Wikipedia?

I sometimes use Goodsearch.com, as it apparently donates a part of the advertising revenue to charity. Regardless, sometimes I see really odd behavior that results from non-commercial sites like .edus and even Wikipedia appearing as sponsored results. Does Wikipedia advertise to drive revenue to their sites? If not, who is sponsoring (i.e. paying) to drive visitors to Wikipedia and other apparently non-commercial sites? In the screenshot below a number of results are from Wikipedia. Or is it Yahoo or Bing trying to get a larger share of visitors going through them? 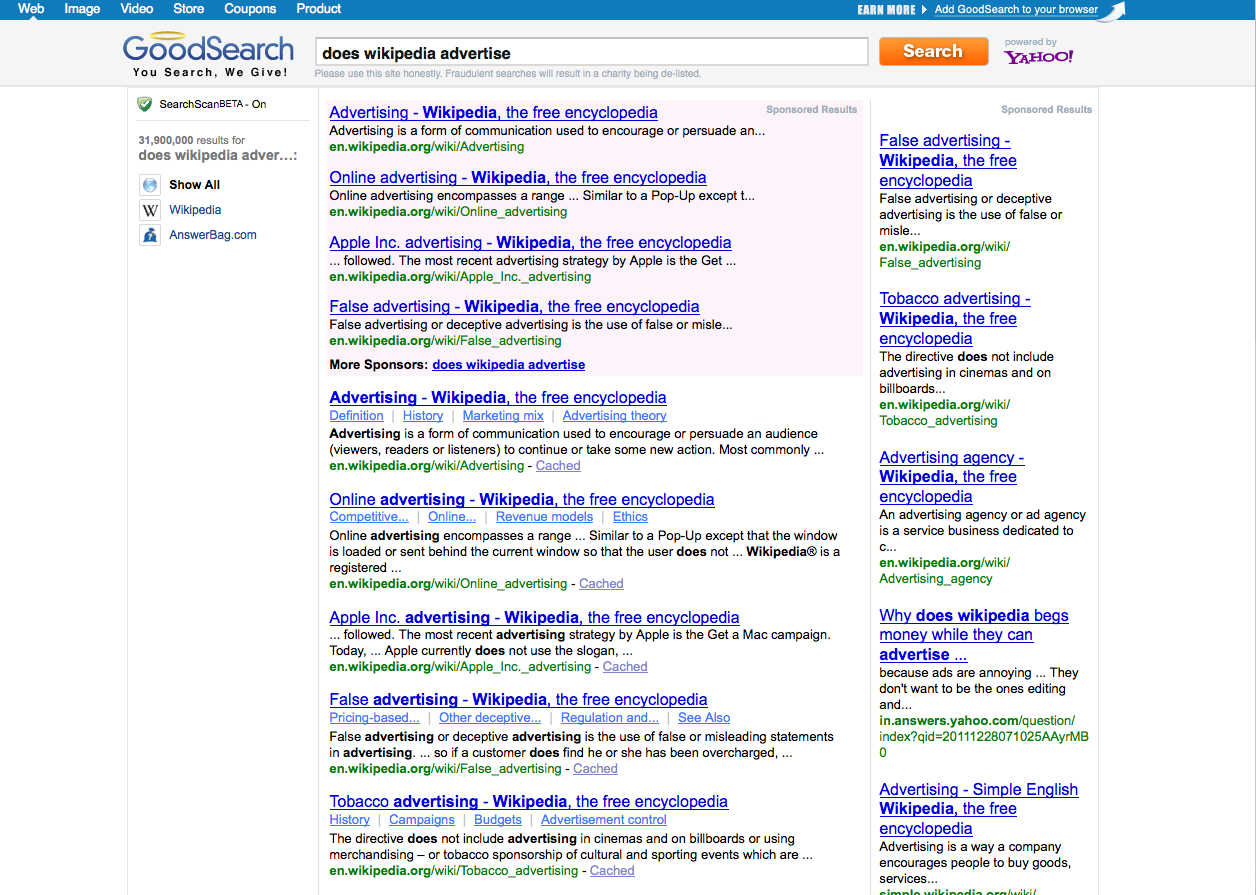 Wikipedia itself needs advertisements to draw people inside, so I guess (warning! only a guess) Wikipedia (strictly speaking, Wikimedia) itself pays for that.

Another consideration: AD providers like Google's AdSense are to pay, instead of to be paid. So Wikipedia may tried to earn a little money by putting itself on AdSense, and, god knows how, appeared elsewhere.

Another suspect: The AD provider may put Wikipedia's (along with other influential non-commercial sites') AD there out of charity.

I found this article http://blog.wikimedia.org/2011/10/26/search-and-wikipedia/ which says Google drive traffic to wikipedia!! This is an old data (2007): "Google is responsible for an astounding 24% of all this traffic. Put differently, Wikipedia/ Wikimedia results in Google searches are clicked on roughly 56 million times a day. (Yahoo in comparison only sends 2%; Ask.com ends up at a meager 0.05%.) Pages from Wikipedia are heavily cross-linked, and internal links from Wikimedia properties make up 44% of the traffic, according to the numbers."

Wikipedia does not want ads because have a look at this: http://en.wikipedia.org/wiki/Wikipedia:Advertisements

If goodsearch.com donates a part of advertising revenue to charity then it must be the one to advertise about wikipedia for free because that is also a kind of charity!

Non-profit organizations can apply for ad credits in Google Adwords. Any non-profit can apply, big or small.

The Google Grants program empowers non-profit organizations to achieve their goals by helping them promote their websites via advertising on Google. Google AdWords ads appear when users search on Google and when you click on one of the ads, you are brought to the website being advertised.

Not the answer you're looking for? Browse other questions tagged search ads or ask your own question.

9
Find out who likes my website using the Facebook like button
1
Wikipedia global search (all languages), without using a third-party search engine?
1
Google Drive search function not searching correctly within documents
1
Why is OkCupid showing me matches who live more than 5 kilometers away?
3
How to search based on part of file name in Google Drive
1
Result starts with someone who is not a friend in Facebook search
4
Search Google Drive files directly from the Chrome search bar?
0
How to limit Team Drive search to a single team drive?
0
How can you search meta-data tags in Media Wiki / Wikipedia?