Recently I've noticed many strange characters appearing on Twitter. Based on one person's joke tweet I read I think they may be emoji or something similar.

How can I get these displaying properly in my browser or on my mobile? 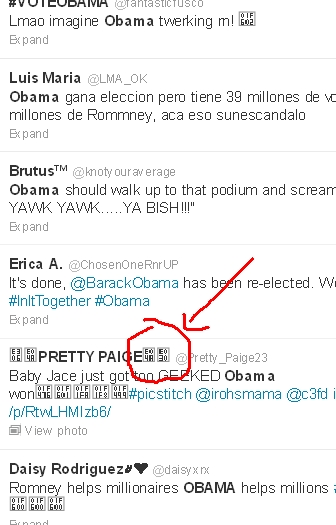 They are different characters (or partly non-character codepoints) that your browser cannot display due to lack of support in fonts in your system. It is common strategy in browsers to display a small rectangle containing the Unicode number in hexadecimal digits. You can use e.g. Fileformat.info Unicode Character Search or the Babelpad editor to find information on a character by its Unicode number. Installing additional fonts in your system may make some of the characters visible in your browser.

For example, in the part you have circled, the first box seems to contain E04A. It refers to a Private Use Codepoint, which means that no character is assigned to it in the Unicode Standard and this is guaranteed to remain so, and between interested parties any private agreement can be made about it. So it’s kinda pointless to use it on a web page, unless you are using a downloadable font that contains some glyph in its position.

The first of the problem boxes seems to contain 01F602, which means U+1F602 FACE WITH TEARS OF JOY, which is an emoticon, of the emoji kind. Emojis were included into Unicode primarily due to their use in Japanese text messaging, but they seem to have gained some geekish reputation and other uses. There are very few fonts that contain this character so far. According to Fileformat.info page on its font coverage, it exists only in DejaVu Sans fonts and in Symbola. In fact you need a fairly new version of DejaVu Sans (the one that I have does not have it). On the other hand, a sufficiently new version of Segoe UI Symbol has it, too, and so does Quivira.

Those look like unicode characters which aren't supported by your browser.

Not the answer you're looking for? Browse other questions tagged twitter special-characters emoji or ask your own question.

2
How to forward a mailing list to Twitter?
8
Why doesn't Twitter's URL shortening always work?
4
How to tag Twitter friends in Instagram?
10
How to stop Bing translations in Twitter?
2
Is it possible to change a tweet's timestamp after tweeting?
4
Is there an easier way I could see all my mentions of my Twitter handle, select many then send a twitter back and block them all at once?
4
How to remove my phone number from someone else's Twitter account?
1
Twitter Bio intersection character - how to insert?
4
What emoji characters are supported in Jira's Quick Filters?