Is there any way to view/show card numbers on every card?

It would be easier to refer to a card using the card number. I see that when you open a card, it shows a number at the bottom right. Is there a way to see this number when the cards are shown on the board. Also, does a similar functionality exits on the Android app ?

I don't think there is a way to display card numbers from the board view. You can suggest this feature at feature-ideas@trello.com

A quick workaround for this until there is a solution is to hover over the card title in the board view. The URL preview provided by the browser (e.g. in Chrome the URL preview of the link is at the bottom left of the browser) will show the card's link. The number at the end of this URL corresponds to the number of the card.

Not a great solution, but the only way to see the card number without actually clicking into it.

You can use this bookmarklet.

I'm going to create some Google Chrome Extension in near future.

But this bookmarklet is very simple fast solution to show card numbers on each card.

There is now a Power-Up in the power ups list that allows you to add card numbers to all cards. Just enable the powerup and you'll see the number on the front and back of all cards.

No browser extension needed, it's provided through the official directory of power-ups and works in the new standalone apps.

You can hack your way to adding card numbers for everybody (without requiring everyone to install an extension) by using the third party Butler for Trello tool, which lets you run automated actions on certain triggers.

Since Trello currently does actually have card numbers for each card in its data model (which is exposed via the API), we can get Butler to write the card numbers into the names of each card.

After you follow the instructions to add the Butler user to your board, the bot will add a "Butler" list to Trello. Add the following cards to it:

Now when you edit a card's title, the card's number appears at the start: 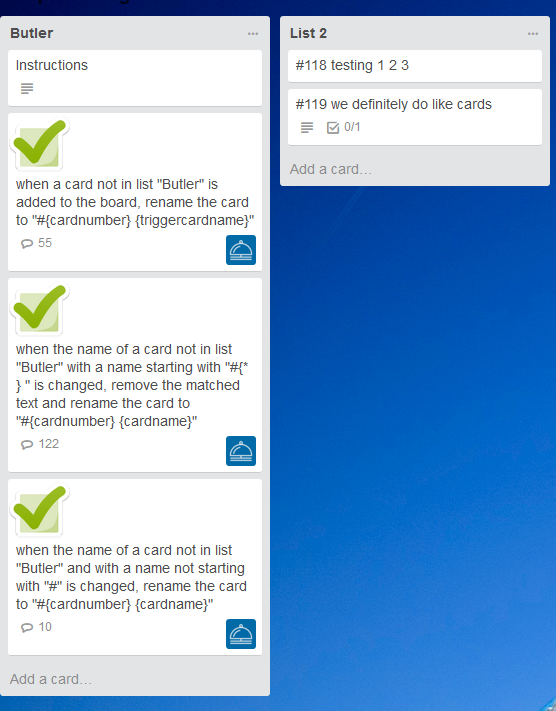 Disclaimer: I am an Atlassian (which develops Trello) employee, but this is not an official recommendation or advice. This technique may stop working at any time due to either changes in Trello or Butler for Trello (no affiliation). Consider using card linking to refer to cards instead, which is resilient to e.g. moving a card from one board to another.

Looks like you might get your wish ... card numbers just showed up on my Trello board. Not sure if it was due to some funky filtering I did, or if they just pushed an update. Either way, I'm looking for a switch to toggle on/off, otherwise it just adds more clutter in cases where you don't need them.

I had the same issue, that's why I created this plugin few days back.

Caspar's answer was the key for me. Now that Butler is part of Trello, the steps have changed a bit, but the idea is the same and this solution works for Trello "Free teams" without using up a power-up. It also doesn't require a browser extension.

Here is the rule I'm using:

Not the answer you're looking for? Browse other questions tagged trello trello-cards or ask your own question.

10
Is there a way to drag and drop in Trello on Android browsers?
4
Can I show card details from the Board view?
3
What determines the length of a Trello list?
2
Is there any way to have Trello Card Cover image be an image URL from the web?
2
Filter card text using a custom search term
3
Trello - is it possible to see a board as it was at a given date?
4
Is there any way to see the number of cards in a Trello board?
0
Do card Members get notified of all comments automatically?