This question does not appear to be about web applications within the scope defined in the help center.

Google provides some pretty cheap online storage. My organization is interested in using this to host backups of some of our data on the Google Cloud. We may just want to use this as an offsite backup, in case our onsite backups catch on fire. The files are mostly images and video, most under the 1G limit.

Is there a way to batch upload files to Google Docs?

Are there any extensions which will let me browse Google Apps as a local folder, similar to WebDav?

And to clarify, we'd prefer to do this from a Linux (Ubuntu) server.

Yes, this is possible. However, my question was too vague. Google Apps has different components. "Google Apps" and "Picasa" are both Google Apps, but they behave differently. For example, Google Docs uses the Google Documents List Data API, Picasa does not. Sadly, many projects at Google seem like little fiefdoms, and APIs are not consistent across the kingdom.

The solution also depends on the filetype and if you use the Google Premier edition of Google Apps or not. According to the Documents List Data API FAQ Google Apps Premier customers can use the API to upload files of any type. Other users can use the following upload formats: (See the link for a list, which includes things like .csv, .pdf, etc.)

There are several great solutions below, but all have their limitations, or have themselves run into limitations with the Google APIs.

Check out GoogleCL. It lets you interact with google services from the command line like:

The most recent release says it includes uploading directory trees to Docs. A little bit of shell scripting should let you cron job a backup.

If you're going to be doing this on a Linux server you could try GMailFS which uses FUSE to mount your google mail (which should also work with google apps) storage over IMAP as a local file system.

A tool called "Google Docs Upload" may do the job:

I've had limited success with this tool. Unfortunately, it doesn't support image files yet, although that is now allowed by Google.

I don't know if there are any tools for this, but the Google Docs API might allow you to programmatically manipulate uploaded files.

The Google Apps storage is designed for storing pictures, email attachments and online documents. While there is an API for automating the upload of documents it only accepts specific MIME types unless you are a Google Apps Premier customer. That means you would have to embed your data in a document or spreadsheet file before uploading it.

Instead of Google Apps you should look at online storage providers like Dropbox or Amazon S3. Google also has a labs project for their own online storage service, which is free during the beta and has a python based command line tool called GSUtil for uploading files.

You can't do it directly with Google Docs but you can use GMail as an Online Hard Drive with Gmail Drive.

There's a firefox extension which allows you to use space on Google like a HDD, called GSpace.

Much has changed since I posted this question in 2010. Now of course, the proper answer to this question is Google Drive for Windows, Mac, Android, iPhone and ChromeOS devices. However Google Drive doesn't exist for Linux platforms, but there are a few projects attempting to do that.

Google Drive lets you store and access your files anywhere -- on the web, on your hard drive, or on the go. Here’s how it works:

You can use smestorage which gives a virtual cloud drive for Linux and it comes as a Debian package. They are currently in beta and are planning for desktop syncs soon.

Memeo Connect has been the craze for Mac and PC users (robust searching as it uses Google's API) maybe they will come out with a linux version ? This is only for GoogleApps Premier users only though. Keep an eye on them.

It would seem that Google's Storage API, positioned right in Amazon S3's market, is geared to be their bulk cloud storage option. Though they do have the gsutil you mentioned earlier, the online Storage Manager works really well as a drag and drop interface for uploading/organizing files and managing "buckets". 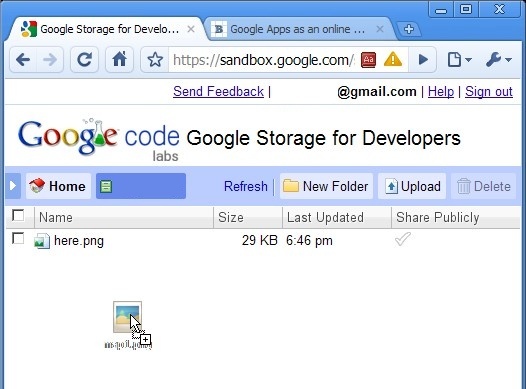 They also claim that because of their RESTful API, it's compatible with existing cloud tools:

Google Storage is interoperable with a large number of cloud storage tools and libraries that work with services such as Amazon Simple Storage Service (Amazon S3) and Eucalyptus Systems, Inc.

I haven't had a chance to test that yet.

You are permitted to create buckets (and cannot nest them) but you can name your objects inside of them with / to emulate your local storage:

Google has planned pricing at

plus other bandwidth costs.

Marked community wiki, since it's somewhat tangential, speculative, and not available yet.

I've used Gladinet for this and it works great. They also support many other cloud based storage (Amazon S3) if you want. It lets you map a drive to your Google Storage.

They don't support anything but Windows however but you can setup a windows machine as a cloud AFS and backup Linux machines that way.

This is a relatively new feature, but you can upload any document to Google Apps. Check it out at http://docs.google.com/support/bin/answer.py?answer=50092.

I believe the way to achieve closest to what you are looking for from your question would be to use the newly released Memeo Connect.

With the first version of Connect, users get a way to easily upload documents of different formats into Docs, then access those documents on their desktop computer, including when they’re offline. If a document is edited, the content is updated across the user’s computers and in Docs.

Version 2.0 of Memeo Connect, which is available in a test version today, takes things a step further. Now Connect can really integrate with your computer’s file system, rather than just working as a standalone app. After you install and launch Connect, your files show up as the “GDrive” on your computer, and you can interact as if it were just an extension of your desktop. You can drag-and-drop files into the drive, and save files to the GDrive directly from applications like Microsoft Word.

Check out some information on this VentureBeat article, or visit Memeo directly.

I honestly don't know how I went so long without finding this. It autosyncs everything you drop into an insync folder on your computer the same way that dropbox does except...

There are a few key differences:

The only downside I have found so far is that the desktop client doesn't support Linux yet...

Are you subscribed to Google Docs Online? Do you want to synchronize your Google Docs in Ubuntu? If you do, then you’re in luck, because Super Flexible File Synchronizer lets you do just that.

SFFS works in Windows, Mac and now Linux (Ubuntu). It simple GUI helps you synchronize and backup your Google Docs using ZIP compression and data encryption. In this brief tutorial, I’ll show you how to download and configure Super Flexible File Synchronizer in Ubuntu 11.10 (Oneiric Ocelot) so that your documents, whether online at Google Docs or on your location computer, can be in synced. When you’re don’t, all changes made online at GDocs will apply to Ubuntu and changes made in Ubuntu will apply at Google Docs.

May be you are talking about Google Storage.

Not the answer you're looking for? Browse other questions tagged google-drive google-apps or ask your own question.

0
Transferring data between Google Docs and Basecamp
6
Does Google Apps have a "Global Contact List"
39
Create documents with plain text formatting in Google Docs
9
Easiest way to transfer Google data between accounts
2
Temporary / Guest Google apps account
10
Does Google Drive store files locally on your machine?
2
Can I receive large files from anyone via Google Drive?
1
Does Google Forms have two versions: consumer (@gmail.com) and Google Apps for Work versions?