For this question, I've created a Google Apps Script function, that calculates the cumulative sum of a range. Martin Hawksey on Google+ made a comment about a more efficient way of calculating the cumulative sum:

My question is: can this be achieved with the usage of formula's? 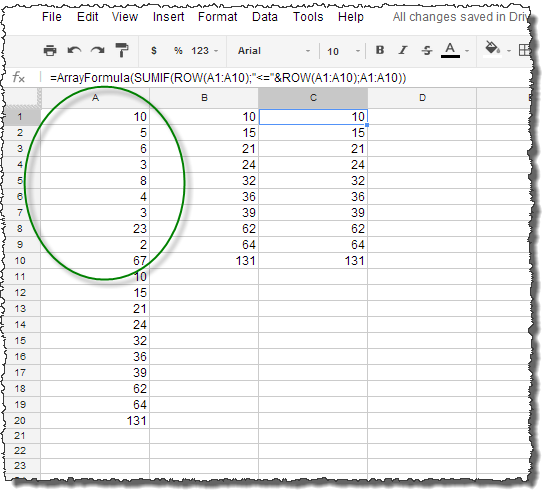 The numbers in the green circle are the ones being summed, the ArrayFormula is populating all the others based on the cell it was pasted into, in this example I pasted in A11, B1, and C1 to show its effect.

This spreadsheet that I made a while ago attempts to explain how MMULT can be used for these sort of problems, and it also demonstrates the SUMIF solution on one of the sheets, which can (and probably should) be used for special cases like the one in this question.

Then you can use:=sum($A$1:A1) where A1 is the start of numbers to sum. Put that formula in B1 (or where ever you want) and fill it down, and it will sum all cells up to and including the row you're on. Alternately, you can use the =Ax+Bx-1 (x = current row, data in A, cumulative sum in B) format from the "B's formula" section above.

While the accepted answer is on spot it has a major disadvantage due to the fact that the last parameter of SUMIF needs to be always a "valid range" so when it comes to some more advanced running total calculation MMULT is the better option: 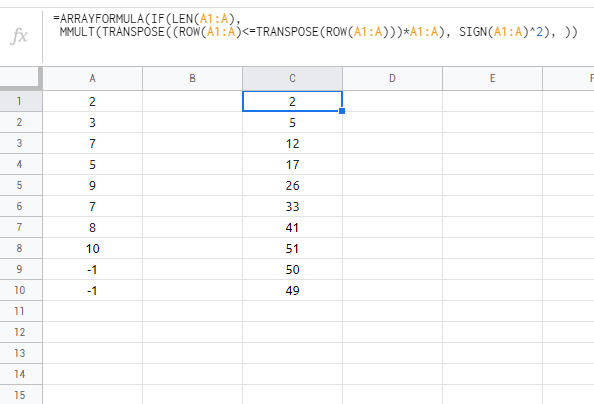 The accepted answers are far too complicated for running tallies. A much easier answer is:

Substitute the A for the column you want. Substitute 1 for the row you want. Click the small box in the bottom right corner of the cell and drag it down to auto tally the cells you chose. 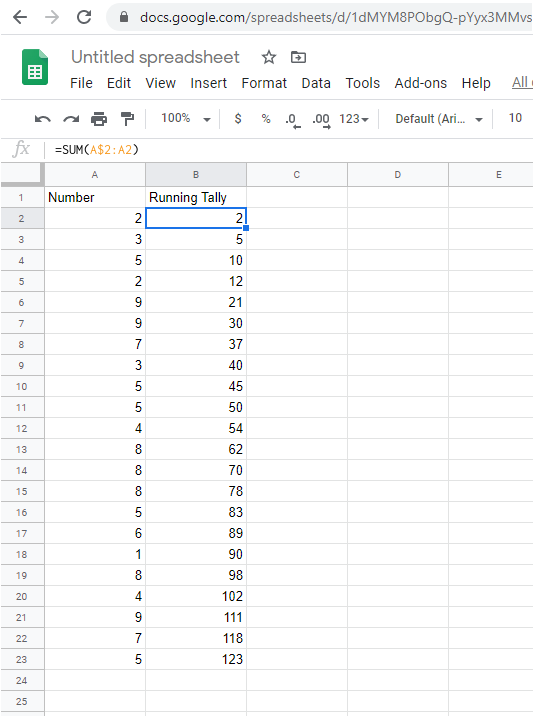 Note: I know when this was asked that my solution might not have been available but in 2020 the title 'Cumulative Sums without Scripts' makes this a leading google result for the query 'running totals in google sheets' and all the Google results had long complicated answers.

Not the answer you're looking for? Browse other questions tagged google-sheets google-apps-script formulas google-sheets-arrayformula or ask your own question.

1
Is it possible to reference a cell above with an ArrayFormula?
4
Conditional Cumulative Sum using Arrayformula
5
Create a 7 day running total and running average using ARRAYFORMULA
5
Getting a sum of cells (bottom to top) in Google Sheets until a specific value is matched
3
How to apply a function to all the rows preceeding the current one in an arrayformula?
1
How do subtract value in two consecutive rows and print it in a column
1
SUM of all cells in another column, except above rows
0
Increment value based on condition
0
Aggregated column based on a pivot table column