How can I make some data Autosort in a spreadsheet on edit?

I am working with a simple spreadsheet that has name/lastnames in it. I need for the spreadsheet to automatically sort the entry alphabetically by the last name (column B). I have used the following code:

However, when I run it, I get the following message: Cannot read property "source" from undefined. (line 2) 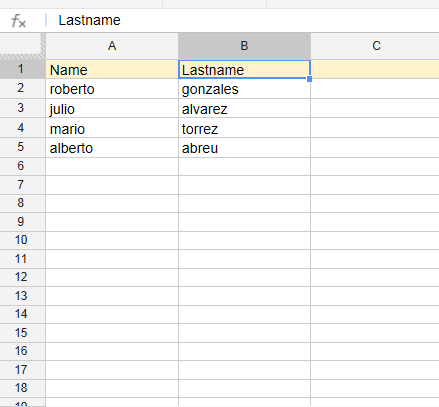 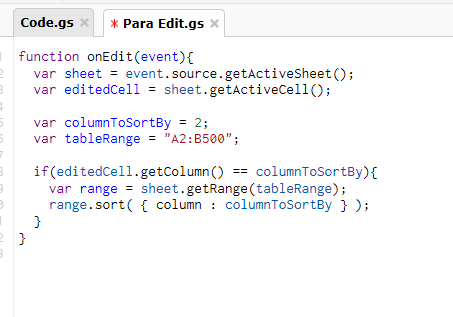 This piece of code works:

One key difference is the .getColumnIndex. Without it you don't receive an integer !!

Here's a generic script that will autosort based on the 1st column, and assumes a Header row.

To create a script:

In the menu, go to Tools -> Script Editor... In the empty code window, paste the following code, which will run automatically whenever a cell is edited:

Included because it's a new answer to an old question

In consideration of those who find this question when searching for how to autosort, at the end I added a section with links to questions about that.

The error was calling the onEdit(e) function from the script editor. The script works fine when it's called from an edit event.

Cannot read property something from undefined. (line something)

on simple functions like onOpen and onEdit and any other function that had specified and argument, like e on function onEdit(e) {...}, occurs when they are ran directly from the script editor because the script editor do not assigns an object to the argument, so in the previous example e is undefined.

When we want to test something like function onEdit(e){...} directly from the script editor, we should add a function that assigns an object to the argument and then call the function to test, something like the following:

The above script assumes that we want to test the onEdit function taking the currently active range as the edited range.

Then on the script editor function drop-down selector, select test_onEdit and click the Run button.

On more complex simple or installable onEdit functions to test, it could be necessary to include other properties to emulate correctly the event object. Let say, that we need the the value property of the event object only when the edited range has a size of 1 x 1 (a single cell)

This script will sort the column of the edited cell automatically (alphabetically). You only need to change the value of 'headerRows'.

I used this piece of code:

77
How can I make some data on a Google Sheets auto-sorting?
5
Auto Sort Sheet on second entry
0
OnEdit won't apply to all tabs in Google Sheets

2
How to use Google Scripts w/ spreadsheet and jotform to auto sort so the newest entry is always listed on the top row?
1
How do I Import a Range from one Google Spreadsheet into another?
0
Optimizing Delete Rows Script
4
Google Sheets Script Editor action not applying to all sheets
2
Add a new row to a spreadsheet, copying down formulas when a certain cell reaches a particular value
1
Why would I be getting the error: Too many simultaneous invocations: Spreadsheets on a simple once a day trigger?
0
search/match a date on Google Sheets using Google script and copy a source range to a destination range OFFSET from that date
0
How to send email to a person selected from a dropdown menuwith all answers of a response of the form submission?