Here å is not a problem but it's Ã¥ on this page. Why? 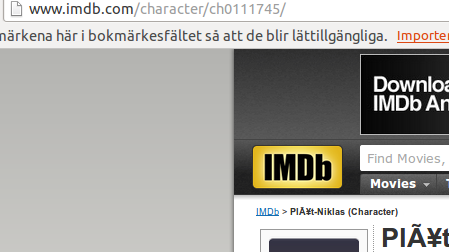 When creating websites, special characters need to be taken into extra consideration. HTML, the markup language used to write webpages, provides its own means of including special, non-"normal" characters. These characters include accent marks, special symbols, and more.

The reason this is necessary is due to the nature of how webpage files are saved. In order to minimize file size and provide the most consistent experience across computers, an encoding is used that maps each character to a binary (numerical) representation. The binary value of each character is stored sequentially in the file; therefore, the more characters your encoding allows, the larger the file becomes - exponentially. (For more info, check out: http://en.wikipedia.org/wiki/Character_encoding)

The reason the character appears okay on the other page is because the person who wrote it understands how HTML works. As I said earlier, HTML provides a way to represent special characters using non-special characters.

A lot of websites that allow user input, such as Facebook and Twitter, will automatically reformat these characters in HTML so they appear properly when viewed through your web browser. Apparently, IMDb doesn't do this. I would like to note that the page with the character mess-up was submitted by a user, while the other page is an official IMDb page, which was likely written by someone who understood how HTML represents special characters.

Not the answer you're looking for? Browse other questions tagged localization imdb special-characters or ask your own question.

5
Why does the internet think I'm French?
2
How do I query IMDb for movies that two actors have in common?
2
Why does Deezer default to French (or just does not show in the original language)
3
How to add a movie to my watchlist in IMDb, in the movie page?
1
Why do I see Russian articles while I don't speak Russian in Google News?
2
Can we “escape” a # word in a Google+ to avoid conversion to a hashtag?
0
How to change Google Account language preferences? (NOT IN SETTINGS)