We're planning on changing our emails which are currently on hosted webmail, to run on google apps for business - Gmail.

We've signed up and had a look around, but we couldn't figure out how to achieve the following, we want all incoming emails to be copied to two accounts, so if an email is sent to Tom@.. it would also be copied to Bob@.. so that he could respond if necessary.

Ive tried setting it up using groups, by setting up both accounts, bob@ and tom@, and then also trying to create a group called - bob@ and tom@, but you cant have a group with the same address as a user.

Is there another way to do this ? 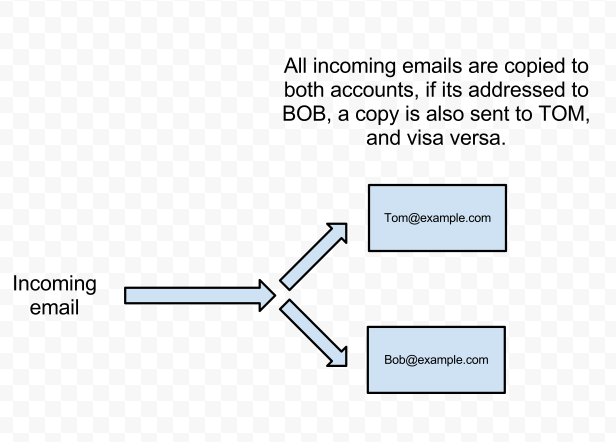 You want to create a filter in each account.

In Bob's account, you create a filter for emails sent to bob@example.com and forward them to tom@example.com. In Tom's account you do the same process except forwarding Bob's email.

This does not create an endless loop because the forward in the filter does not resend the email, it is redirected. When the email to bob@example.com arrives in Tom's inbox, it still shows bob@example.com in the To:

I would also suggest you create another filter in each box. In Bob's account, create a filter for emails sent to tom@example.com. When they are received apply a label like "To: Tom". This will allow Bob to know which emails were addressed to him and which were addressed to Tom -- at a glance.

Not the answer you're looking for? Browse other questions tagged gmail google-apps-email or ask your own question.