How can I distinguish if I have to filter emails via sender or mailinglist (provider)?

I have a similar problem to the person with this question.

The e-mails I receive aren't totally unwanted though, but legitimate newsletters. They clutter my inbox though. And as the fella above I noticed that I have difficulties filtering some - but oddly enough not all! - emails coming from a mailing list provider such as AWeber or MadMini. The problem with these pesky mailing list providers is:

Gmail doesn't seem to recognize those as a mailing list in the sense of a collaborative mailing list as it is used by NGO's, political-, student-, mum- and nerd-groups, i.e. usually I cannot filter them by using the "list:" filter that is visible in the third example within my screenshot below: 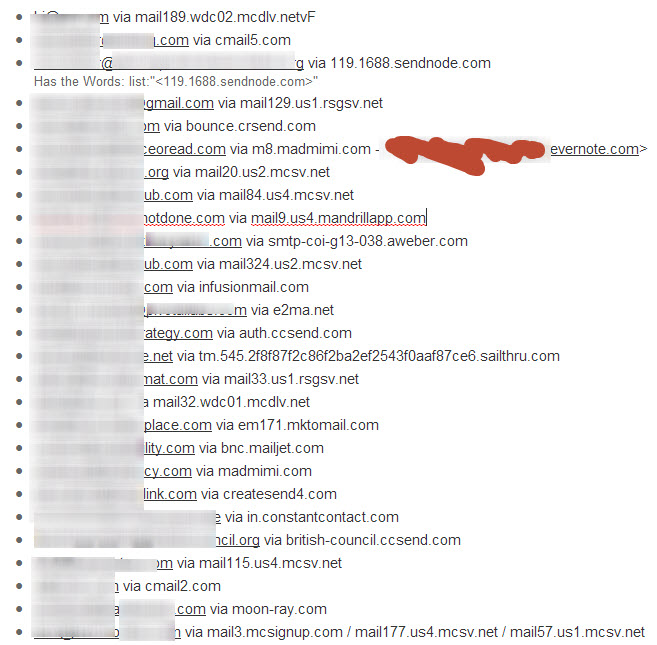 Another thing I heard / noticed: Some of these e-mails run via the same mailing list provider, but even though the (individual) sender/marketer doesn't intend it to, the mailing list provider somehow seems to use a different "via" URL! As you can see in the screenshot e.g. in the last example / row. All those little numbers in front of the top-domain seem to regularly and randomly get changed, making it impossible to filter for the domain itself! Except if I would set a wild card for *.mailing-list-provider-A.com. Which is overkill though: What if I want to receive some content from companies that use "mailinglist provider A", but not some e-mails from others that use company A?

Since you're using Gmail there's actually a very easy workaround:

STEP 1: Instead of your main Gmail address, use a Gmail alias when you subscribe to new e-newsletters. For example, if your main email is "bob@gmail.com", use something like "bob+newsletters@gmail.com". (You can use pretty much anything between the "+" and "@" characters. More info on Gmail's alias feature here and here.) And for the newsletters that you currently subscribe to, simply update your email address in their system. (Look for a link at the bottom of their email titled something like "Update Mailing Preferences".)

STEP 3: Create a new filter for emails addressed to your alias (e.g. "bob+newsleters@gmail.com") that: A) applies the "Newsletters" label, and B) skips the inbox.

So it's basically just a different way of using filters. Instead of trying to flag down and set up rules for hundreds of different sender addresses and/or subject lines, you only have to implement one simple rule -- for a single recipient address. You can also incorporate stars and certain Gmail labs (like Multiple Inboxes) for even more control.

I've been using this method for years and it really helps free up the inbox.

22
How to block "via" senders in Gmail