Any way to stop LinkedIn from asking for my email account password so it can spam my contacts?

On a regular basis, after logging in to LinkedIn and doing something like accepting an invitation to be "added to someone's professional network", LinkedIn will ask for my email account password. It is trying to get my contact lists so it can spam them with requests, on my behalf, to join LinkedIn.

The worst part is that several times I've almost been fooled into providing a password. At first I'm thinking that it is simply asking me to re-enter my LinkedIn password. The request is devious in that it starts off with several dots in the password field as if it actually already knows the password. 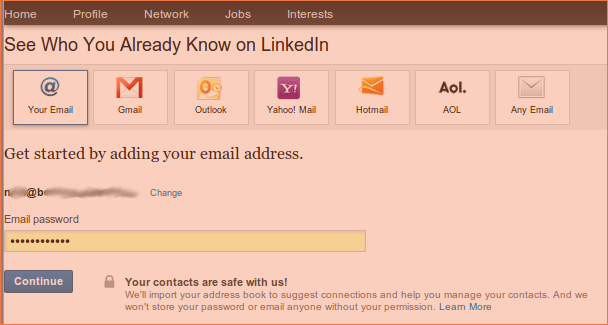 Then I notice it is prompting with the email address I used to sign up with LinkedIn, and my fingers can even start to type the password for that password for my totally separate email account. Then I stare harder at the screen and start to get mad.

This is nearly as bad as phishing and is an insidious and rude practice which I think should be stopped. If they know my email address, various folks at LinkedIn can do anything with it they want, despite the policies which I presume they have to curb abuse. There are of course many terrible security vulnerabilities they open up via this practice, beyond the anger they arouse in the many users who complain about this on their site and the many spammed contacts of those users.

Is there a setting on the site to turn off these requests, or a means of fooling LinkedIn into stopping or reducing them or reporting them to someone who can do something about it?

For example, perhaps providing passwords for dummy accounts, or accounts that connect with the better business bureau or some other watchdog group or folks they don't want on the site?

I believe this goes away if you are a premium user. Free users agree to the Terms of Service that allows them to do trickery like this. It is annoying, but remember that you are using a free service and you have to deal with annoyances like this.

Not the answer you're looking for? Browse other questions tagged linkedin passwords spam-prevention phishing or ask your own question.

1
How to retrieve the lost password for my email account?
4
Any way to manage a LinkedIn Ads account through multiple users?
2
How to stop SPAM in my GMail account?
3
Removing Contacts from LinkedIn
7
How can LinkedIn know about my Yahoo contacts?
2
How to make LinkedIn stop sneaking into my email contacts?
3
Turn Off All Google (Gmail) Security
1
How to stop LinkedIn from sending repeated invitations to my contacts