How to find Free music (tracks) on Google Play?

Just re-discovered Google Play after they opened their new Music All Access offer in EU, and saw this on their front page: "Shop for millions of songs from your favorite artists, including hundreds of free tracks from the biggest names in Rock, Pop, Hip-Hop, and more."

So I wonder how to find the free tracks available?

There is the "Deal of the day" (every day a new track for free): http://play.google.com/store/music/collection/deal_of_the_day

Also found another URL in several blogs/posts, entitled "GET THE HOTTEST SONGS, FREE ON GOOGLE PLAY!" http://play.google.com/store/music/collection/series_overview_theme_2011_10_29 But it's empty now.

PS: there is (was) a blog called "Magnifier" on Blogspot that somehow promoted such tracks, but it's not been updated since late December 2012, as they said they have been absorbed by Google Play.

If you scroll down a bit at the Google Play (Music) Store, you'll see a big banner for free music. 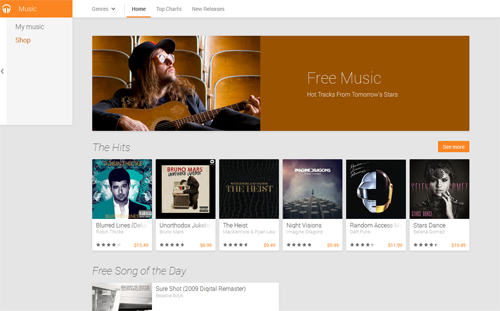 Click the banner and you'll get a list of available songs. I see about a dozen. They change fairly regularly.

Below the banner is also the "Free song of the day".

I am in the U.S. If you are in another country this may not be the same for you.

I use MumbleBee's blog to locate free music offered on Google Play. Sometimes, I'm not able to visit the Google Play music store every day so this blog catches me up on missed (free) tunes with a direct link to the song.

Of course, some of the tunes are free for a limited time. So I wouldn't wait too long before checking back.

Here is the best search term for finding free music in Google play.

You can add some additional tags to this like: