Getting Started with Phidgets and ActionScript 3 http://www.mikechambers.com/blog/2010/07/26/getting-started-with-phidgets-and-actionscript/

Getting Started with Phidgets and ActionScript 3 http://bit.ly/xxxxxx

How can I get the Twitter web application to understand that I still have usable characters once they shorten the url ?

Without having to use third parties such as Tweetie or Hootsuite.

(I am not posting URL shortened links so I have put a place holder, here is the original http://twitter.com/phwd/status/19671211151)

The only way that I know to get around it is to shorten the URL yourself BEFORE you try to post an update via the web.

That is the process I do.

Three years later, Twitter is smart enough to know the length of the short URL despite still having the original URL in the Tweet box. Keep in mind, this is using Twitter's URL shortening service which I believe is t.co.

I've just tested it on the following applications: 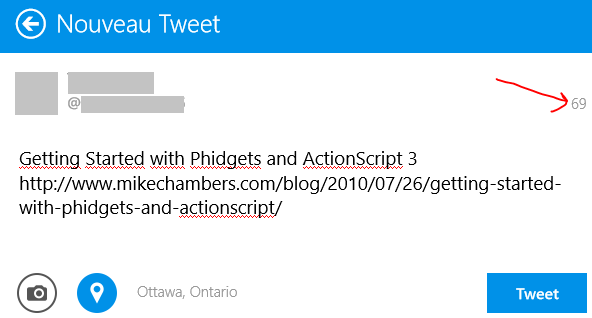 I can also bet that Twitter on Android, Windows Phone, and BlackBerry 10 has the same functionality.

2
Is the official Twitter search widget subject to the API rate limit?
9
Is there any way to preview the URL of a t.co link on Twitter?
36
How did this guy hack Twitter's 140-character limit?
8
Why doesn't Twitter's URL shortening always work?
12
Why does Twitter have a 140 character limit?
3
Can I construct a Twitter tweet URL that makes sure I'm in the right screen name?
1
Is it possible to limit the number of visible posts per follower per day on Twitter?